Note: This is an archived publication! Visit www.e-benchmarksstudy.com for the most recent versions of all our Benchmarks studies and Benchmarks Extras.

The 2011 eNonprofit Benchmarks Study is a joint project of M+R Strategic Services and the Nonprofit Technology Network (NTEN).

The 2011 eNonprofit Benchmarks Study (available at www.e-benchmarksstudy.com if you haven’t read it yet!) took a look at data from 40 nonprofit organizations and analyzed trends in fundraising, advocacy, email list size, text messaging and social media.

Now, with Benchmarks Extras, we’re diving in deeper to reveal some interesting – and unexpected – relationships in the data. First up…

If your organization sends any fundraising email, you’re probably also getting complaints from supporters that you’re always bugging them for money.

But do organizations that send out more fundraising email get slapped on the wrist with lower response rates?

Our theory? The quality of the emails you send, and the list you’re sending them to matter far more than anything else. So if you’re consistently sending high quality emails, sending more of them might not be a bad idea! 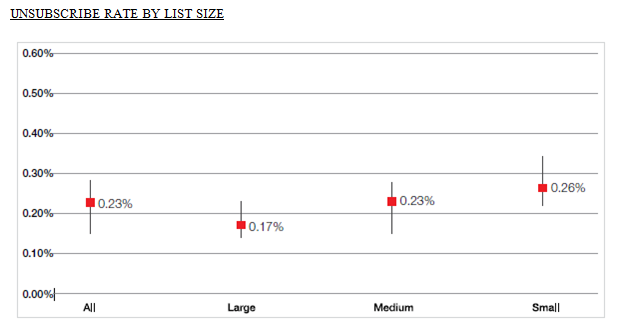 If so, don’t be alarmed – we found that groups with high unsubscribe rates also had high fundraising response rates!

Why? Groups that have active supporters – who open and read their emails – tend to have high fundraising response rates. But the people who are paying attention to you are also the most likely to be upset about something that you said.

Groups with active lists are also likely to be doing a lot of recruitment to fight list churn and grow their base of supporters. We’ve found that new subscribers are very active – but for every fired-up new donor you convert, there’s a new subscriber who just isn’t that into you. Maybe they were confused about your mission when they signed up. Maybe they can’t even remember how they signed up for your list.

So if you see a spike in unsubscribes after a big recruitment campaign, don’t let it get you down – it’s all part of having a fresh, active, engaged list!

If you have questions about Benchmarks Extras – or the data in this year’s Benchmarks study – please don’t hesitate to get in touch with us.