Bird-dog singing in the dead of night

This is a story about the power of 15 seconds.

You probably saw Greenpeace’s video intercept at a Hillary Clinton rally by now. Millions of people watched it in just a day.

There’s been a lot of debate about the video. I’m not going to get into that debate here. Because my first thought when I watched it was undebatable: Wow, that is some doggone good bird-dogging. 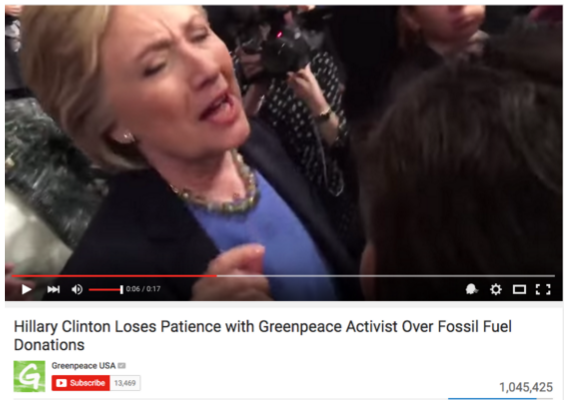 Earlier this year in Iowa, Population Connection Action Fund also bird-dogged Hillary Clinton at her rope line. Back then, the Secretary gave us a very different hand sign: A thumbs-up. And with her thumb and our iPhone, we made history. 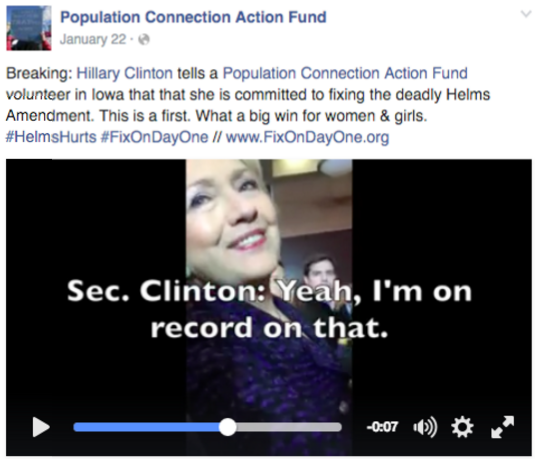 Clinton became the first presidential candidate to commit to fixing a fucked up foreign policy that bans U.S. funding for women and girls abroad who need safe abortion care in cases of rape, incest, and life-threatening pregnancy.

The video did well on social media. Nowhere near Greenpeace levels but people liked it. The video’s power really emerged however when we pitched it to press as breaking news. The incredible Laura Bassett from Huffington Post picked up on the intercept video and used it to call up both the Clinton and Sanders campaigns for their full position on the issue.

Then this breakthrough happened: 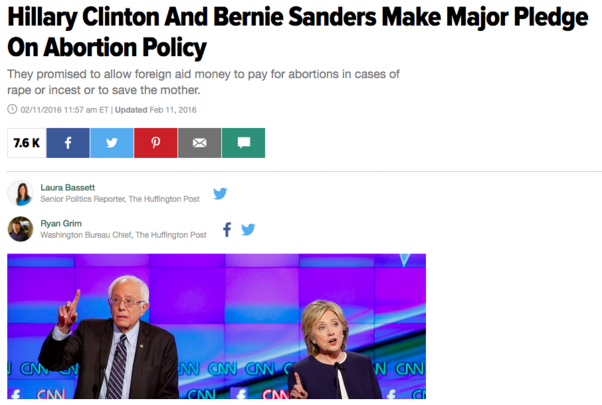 Bird-dogging videos are shaping this election. But their power doesn’t stop there. You can use them to shine a light on your issue and in our case, move it lightyears ahead.

Here are 7 tips to remember as you do:

1 – Bird-dogging is really really really hard. What you don’t see when you watch Population Connection Action Fund’s Clinton video is that it took 4 months to get.

For one thing, it’s hard to even get that in-person moment with candidates. Second, it’s hard to ask the question in a concise way that gets an answer.

For our first attempt to get a Clinton video, there was a mob of people around her and we got her thumb, but not the video. If a thumb shoots up in a forest and no one is there to record it, does it make a sound? No. No it does not.

Our grassroots supporters also managed to get a Sanders intercept video but it was unusable because he just grumbled into the camera and walked away.

And we were never able to get anywhere near Trump. That man is a human fortress.

2 – The best locations for bird-dogging are at town hall style forums and festivals. There was a Republican presidential event on Halloween at the Iowa state fair grounds. Candidates didn’t have a huge entourage around them so our field organizers could bird-dog like they were shooting at a barrel of fish. (Is it kosher to mix bird, dog and fish metaphors?)

In only one afternoon, we got Christie & Fiorina sounding downright sensible on the issue. We also got a video of Santorum being the idiot he is that the internet loved:

When thinking about bird-dogging congressional races from here on out, I’d send my activists to these townhall and festival settings.

When thinking about bird-dogging presidential races at this point, I guess I’d send activists there too but just know that the campaigns at this stage are so tightly controlled that you will have a hard time getting to ask the question. After the Greenpeace video last week, that reality may bite even more.

3 – Bird-dogging is a 2-person job. You need one person to ask the question. And the other person to hold the phone. You just do.

4 – Camera phones are perfect. They’re unobtrusive. They are easy to upload content. They are gritty enough to feel real to your audience.

5 – Hold the phone horizontally. And tell your people to hold it horizontally every time because I’m telling you, they will forget.

I don’t like that the video is vertical. It looks bad on mobile. It looks even worse on broadcast TV.

History should be made horizontally.

6 – When you get the video, subtitle it before uploading it to social media. It’s a pain in the ass but it’s a 10-minute pain that pays off.

With basic white text subtitles, people who don’t have volume on their phones or computers will still get the gist. Subtitles also give you a screenshot with text on it to send to supporters and press so they can instantly see what the candidate is saying without even having to bother watching the video.

7 – Always send the good videos to the right reporters. Most bird-dogging videos won’t go viral like Greenpeace’s did. In most cases, sharing your video with a reporter is what elevates the video from an activist action to a game changer.

About 3 weeks went by between the Clinton video and the press breakthrough. During those 3 weeks, we weren’t sure the video had really accomplished anything. And then we got the HuffPost news and it changed the campaign and gave hope to women and girls around the world who for 43 years have been told by U.S. leaders, “No, we won’t help you.”

That is the power of a 15-second video from a supporter in Iowa.

15 seconds can make or break a campaign. How to bird-dog candidates and get it right. #nptech https://t.co/FsNETU9aIg