Nobody knew what the Supreme Court would do in the Hobby Lobby case. But when the decision came down, Planned Parenthood Action Fund responded like they’d known the outcome all along — because the truth is, they were ready for every possible outcome.

That’s Lesson One: Just because the future is unpredictable doesn’t mean you can’t prepare for it. You can tweak and retweak copy and graphics so that no matter what happens — a win, a loss, an incredibly damaging and poorly reasoned ruling from Alito, whatever — you’ve got your email, press release, and web content ready to go.

What might not be on your prep list when your issue is in the spotlight is investing in social media marketing to grow your list. But when the news is laser-focused on your issue — regardless the issue — it should be. That’s Lesson Two.

Lesson Three: You don’t know what content is going to work best. You might have a guess, and we all have an opinion, but you don’t know. So you gotta test. Here are the three ads that launched: Can you guess which one won? Was it: 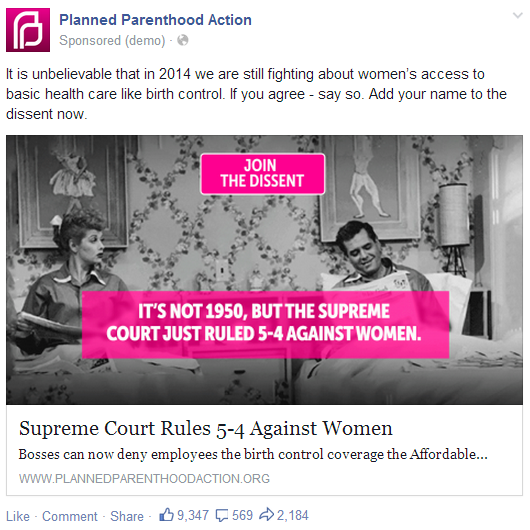 B) “Close-up of Justice Ginsberg, pretty P.O.ed, asking everyone to Join the Dissent Ad” 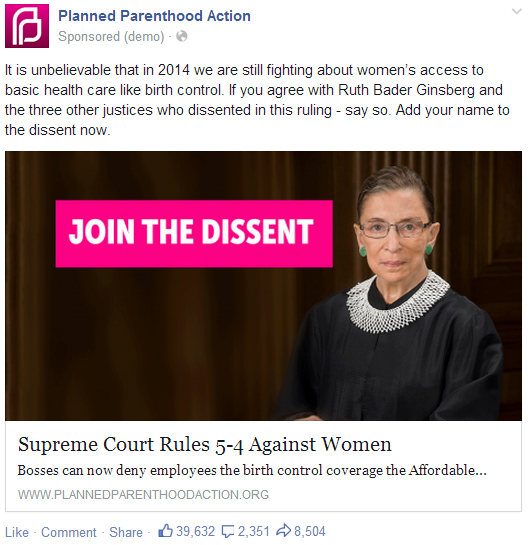 Or C) “The full Supreme Court, being called out for ruling against women Ad” 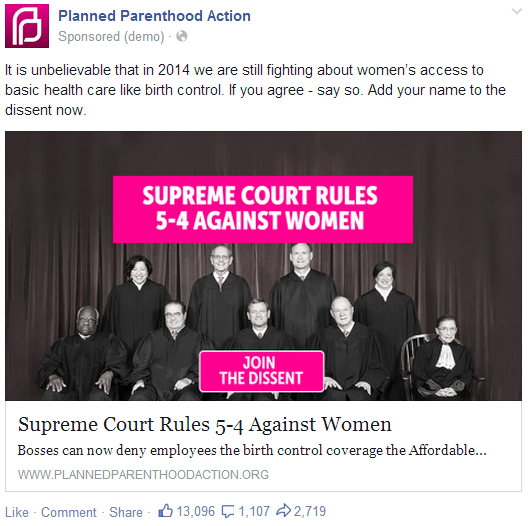 One thing to notice: only A and C actually include the breaking news in the image. Version B just had a call to action with no context — and Version B won. The Notorious RBG recruited the most new supporters.

So Facebook started showing the best performing ad (Dear Justice Ginsberg) to more and more people, and we ended up with one helluva successful day.

Nearly 200,000 people have Joined the Dissent with Planned Parenthood Action Fund — with more than 27,000 of them driven directly from these Facebook promotions. When all was said and done, they ended up with a near-unheard of cost per name of $0.37 — the best we here at M+R have ever seen! And to top it all off, the names they recruited have already paid for themselves twice over. How’s that for a good return on investment?

So what are the takeaways?