You saw all those emails from the Obama campaign asking you to “chip in $5.” Maybe you’re even sending ones like them yourself: 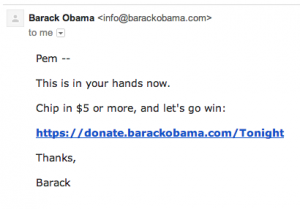 Just because a low-dollar ask seemed to work for Obama doesn’t mean it will work for other organizations. So being data nerds, we worked with a bunch of our clients to take a deeper look and see what the numbers would show us.

In total, we worked with ten different clients to analyze the impact of various low-dollar asks. We tested referencing $5, $8, or $10 in the email copy sent to prospects. While we saw some trends in favor of using a low-dollar ask, questions remained after each subsequent test.

Although we’re not yet done testing this tactic with our clients, we want to share the FOUR questions we think any organization should ask when they are considering, or already using, a low-dollar ask.

1) Will it increase revenue?
It wasn’t a big surprise that for nearly every client, we saw a statistically significant increase in the fundraising response rate and a statistically significant decrease in the average gift when offering a low dollar ask. Duh! But the real question, always, was about the difference in total revenue. We saw mixed results. Seven clients raised more with the low-dollar ask while three raised less.

2) Who do you ask?
Segmentation matters. We don’t see the $5 ask as an effective strategy for recent donors – they don’t need the bar lowered the same way that lapsed or prospective donors do. Consequently, for nearly all of our clients, we only tested the low-dollar ask with prospects, or, for one, with lapsed donors. Are all prospects equal, or should you suppress people who recently joined your email list? How lapsed should the donor be before you send them the $5 ask? If you have a big enough file, we definitely encourage you to test the impact on various sub-segments of your list to see who responds to the low-dollar ask and who doesn’t.

3) How low can you go?
$13…$10…$8…$5…$3? We’ve seen the whole range, but the bottom line is there’s no one-size-fits-all ask amount. Here’s something to consider, though: Two of the three organizations that saw a decrease in revenue using a low-dollar ask had the highest average gifts of the bunch. So if your email-driven average gift for prospects is on the higher end – say, above $60 – you probably don’t want to start off offering $3; if it’s $25, $3 might make sense. Just take the Goldilocks’ approach – test different amounts until you see which is just right (if any at all).

4) How often should you do it?
For most of our tests, we only ran it for the first couple appeals in a series. Usually the first appeal saw a big difference in revenue in favor of the $5 ask, then the second or third appeal saw little or no difference. So in December, we worked with the Union of Concerned Scientists to test the $5 ask for an entire, six-message campaign. Overall, there was a miniscule difference in revenue raised between the $5 test version and the control – but message-by-message, the results were stark – sometimes the $5 ask raised more and sometimes the control raised more.

These results highlighted that organizations should test a low-dollar ask for an entire campaign before drawing big conclusions about its impact. It also suggests that a low-dollar ask might work better in some messages than in others – and maybe using it sporadically is the best approach!

What’s next?
We’re going to keep testing this tactic. Some of the questions we’d like to answer include:

Let us know if you have any questions about what we’ve shared. And if your organization has tested the low-dollar ask, please share what you’ve found in the comments below!

UPDATE: Want to know the long-term value of the low-dollar ask? Check out our follow-up blog post! Spoiler: the $5 ask still wins.