Do Images Help or Hurt Your Email Campaigns?

Once upon a time in cyberspace, we assumed that including an image in an email action alert or fundraising appeal would make it more effective. But that era may have come and gone. Several recent tests we’ve conducted on behalf of our non-profit clients indicate that images may no longer boost response rates. In fact, they may be detrimental to your cause.

If you’re trying to save the Arctic Refuge, why would including a photo of an adorable baby polar bear in a fundraising appeal potentially depress response rates, you ask? Although it’s impossible to say with 100% certainty, we’ve identified two likely culprits for the decline in images’ effectiveness.

1) Images are being blocked. The default setting for Outlook (from 2003 on) is to block all images, and more and more ISPs and email providers either block images by default (including Gmail and AOL) or offer image-blocking options. Many people, particularly the less technically inclined folks, will never adjust these default settings. Therefore, as people upgrade and change email providers, more and more of them will likely NOT see the images in the messages you send them.

Although your message may still be compelling, it may appear to the reader to have an ugly, confusing hole in it where the image should be. Worse yet, if you failed to specify height and width attributes for the image when you were setting up your message, the blocked image may actually fill the entire computer screen – pushing your content far down the page and making it more likely that the recipient will never see the text or click on the advocacy/fundraising link you provided.

This scenario may be slightly off-putting for a message with just one or two small graphical elements, but it could spell real trouble for a highly “designed” message in which a great deal of the content is represented using images. It may also be particularly problematic for people who decide whether or not to “open” and read the message by glancing at the preview pane. If all they see is white space, they’re probably not going to open the message. See page 4 for an example of what a graphics-heavy email looks like in Gmail.

2) Images are triggering spam filters and blockers. The rise of spam has led to an army of spam-blocking services and filters. More messages with images are being caught or “quarantined” by overaggressive spam blockers that mistakenly identify as spam or pornography any email containing an image. The upshot is that messages with images may now have a much tougher time reaching your subscribers’ inboxes than they did even a few years ago.

What Do the Tests Show?

To provide a bit more grist for the mill on this question, check out the data below from the three tests we conducted on behalf of our clients, all nonprofit environmental advocacy groups.

The test below was designed to determine whether the inclusion of an image would increase or decrease response rates to an email advocacy alert on polar bears. We chose this particular alert because polar bears are visually appealing crowd-pleasers, making it more likely that including a bear photo in the message would significantly boost its appeal — at least more so than a photo of a vulture, eel, or warthog.

Three versions were sent to randomly and equally divided samples of the organization’s email list. The text of the three messages was identical; the only difference between the messages was the number of images contained in each. 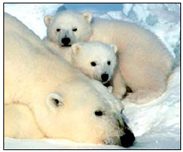 The photo is pretty cute, right?! Who wouldn’t want to help this adorable bear family once they’ve gotten a good look at them? Interestingly enough, including this additional photo did not boost response rates!

The results from each of the three messages were shockingly similar. While the version with no HTML wrapper or image had a slightly lower open rate and response rate than the other two versions, the differences among the three versions were so small that they are not statistically significant. This means that we cannot say with any certainty that including an HTML wrapper or any additional images in an email message has any effect on open rates or advocacy response rates.

Are Images More Effective in a Fundraising Appeal?

Another question we couldn’t help exploring was whether or not images might make a difference when used in a fundraising appeal instead of an action alert. We tested the inclusion of images in two separate fundraising campaigns for another nonprofit environmental advocacy group. The results of both tests are below.

Overall, the difference in open rates and response rates to these fundraising appeals was not statistically significant. The version without the photo raised significantly more than the version with the photo, but this difference was due in large part to one high-dollar donation.

As in Test #1, both messages contained HTML wrappers with header and footer images. One message contained an additional image of a landscape, while the other message contained a callout box in the upper right hand corner with a brief blurb about the campaign and a link to the donation page. The call out box was formatted in HTML, but contained no images.

Overall, the difference in open and response rates to these fundraising appeals was not statistically significant. As with the first test, the version without the image (albeit with the callout box) raised significantly more than the version with the photo, but this difference was due in large part to one high dollar donation.

Although we cannot make any definitive claims based on the results of just three tests, these results do indicate that the inclusion of additional images does not increase response rates to advocacy messages or fundraising appeals, nor does it decrease them. While it may not hurt to include properly formatted images in your email message (thought it could hurt if your message gets quarantined or rejected by a potential donor or activist because it looks blank in the preview pane), it also does not appear to help at all.

However, if you’ve got a great photo of charismatic or cuddly animal, beautiful landscape, or appealing person making direct eye contact, you may want to use it – provided you take the time to format your image properly (see our tips on this below.) But if you’re running out of time, can’t find the right photo, or simply can’t afford the licensing fee for the photo you would like to include, don’t sweat it! Your action alert or fundraising appeal will probably be just as effective without it!

Tips for Including Images in HTML Emails

What Not to Do – GoDaddy.com Email Received in Gmail Account 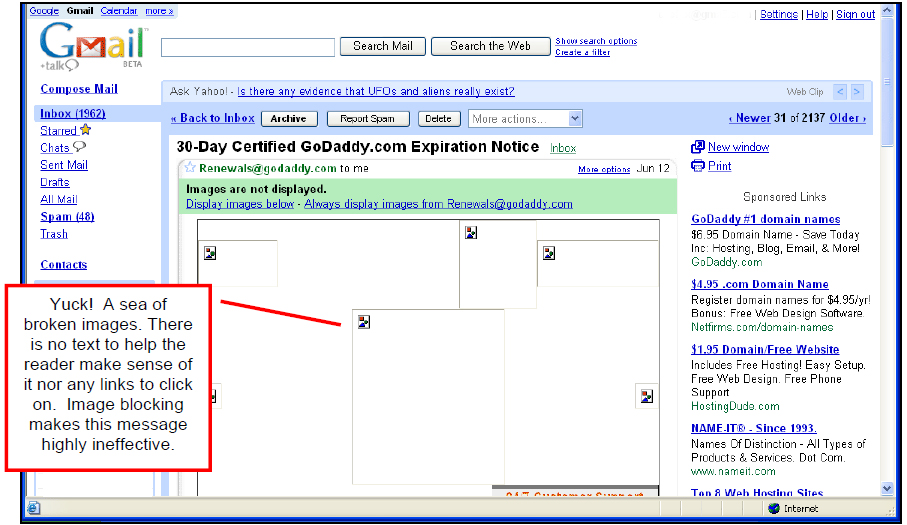