Dogs, Donor Goals, and Deadlines: Ideas You Should Steal from 2020 Candidates’ Digital Ads

Ahhh, FEC deadlines. You call them federally-mandated requirements for candidates to disclose how much money they’ve raised. I call them quarterly exhibitions of the latest, greatest, and sometimes strangest in fundraising creative, gleefully screenshotting every bumper ad, Instagram post, and very, very detailed MMS I come across.

Is this a weird pastime? Yes, yes it is. But my weird hobbies have dividends for you, because with so many (MANY) people running for president, there’s so many (MANY) tactics you can steal for your nonprofits ads 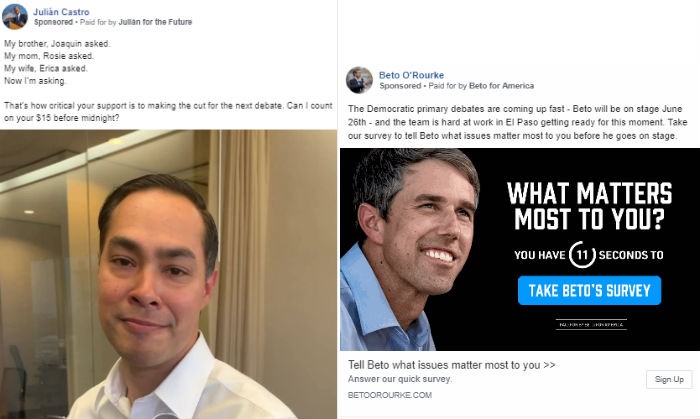 Here’s the thing, <FirstName>: Email is not the same channel as digital advertising. But, as smart marketers, you’re trying to reach the same audiences across a bunch of different channels. If a particular tactic is working on email for your target audience, it might just work on a digital ad.

And speaking of email-ification, another trend we continue to see is message testing. This is not at all new, but nonprofits aren’t adopting this with nearly the gusto that political campaigns are, so I must beseech you: Test. Your. Words. Not only will it teach you what frame(s) resonate best with your audience, or whether emojis and SHOUTY CAPITAL LETTERS improve your conversion rate. Thinking through two or three or five ways of talking about your cause or campaign will make you a better writer, I pinky promise.

Take a look at just a sample of Cory Booker’s ads. He’s trying the donor funded match angle, the ol’ FEC deadline angle, the “ugh this guy is the worst” angle, and the classic “let me introduce you to this everyday donor like you” angle. 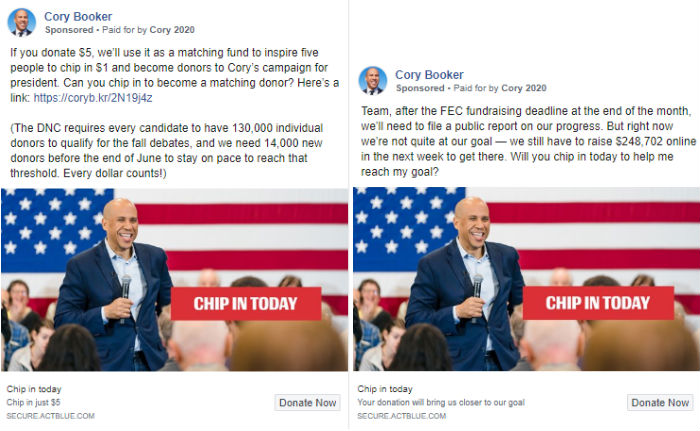 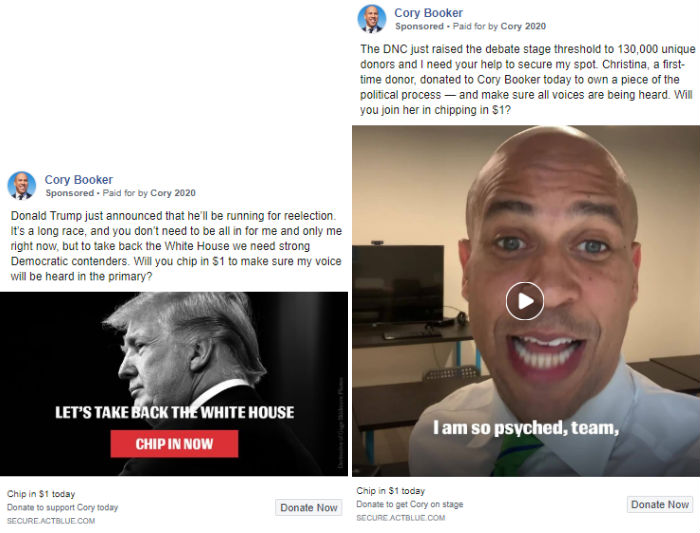 If you’re feeling a little salty after I suggested you double or quintuple your workload with message testing (#sorrynotsorry), not all the trends we’re seeing mean more work for you. In addition to the standard fundraising and lead generation fare, Pete Buttigieg’s campaign has been promoting news articles from third party sources in social ads. 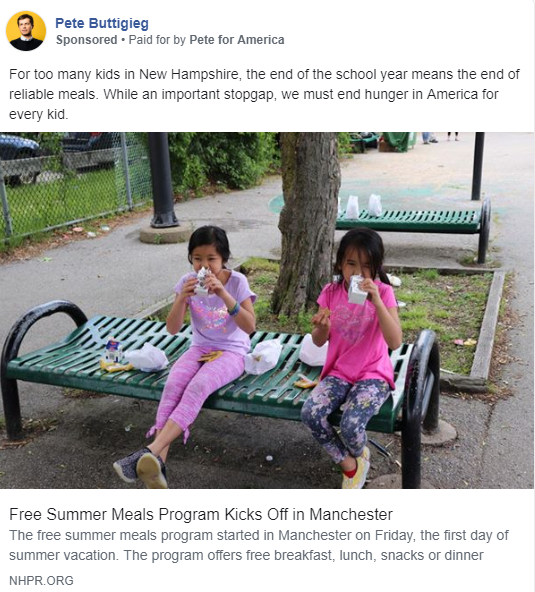 Weird, right? But really, really smart. The right has been investing millions in promoting “articles” from right wing “publications” with questionable journalistic cred (looking at you, The Western Journal!). They regularly pump out “articles” that are shared more than 200,000 times on Facebook. In this year’s Mediamarks Study, we saw that on average a news story that included a nonprofit cause was shared on Facebook… about 2,000 times. 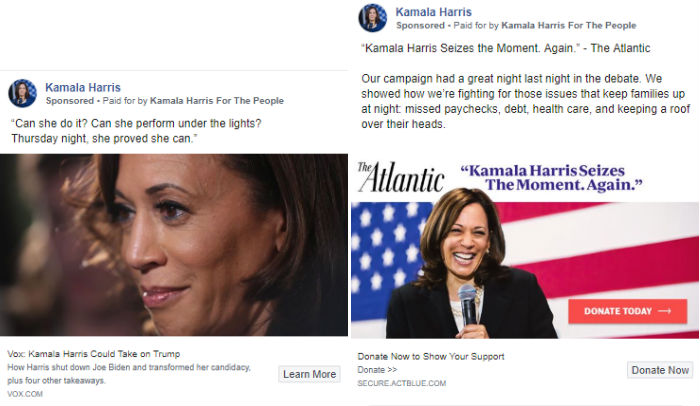 If you’re a nonprofit that’s not yet a household name, or simply want to make sure your perspective is heard on an issue that’s generating headlines, take a page from Mayor Pete and boost some articles. (And if you’re wondering how to juggle this strategy with your ambitious fundraising and lead gen goals, let’s talk more!)

Last, but not least, for all the bells and whistles digital advertising affords us, we’re continuing to see candidates opt for simple, almost minimalistic ads design and copy. It’s a good thing, too: People are processing information and forming an emotional reaction within just 0.4 seconds of seeing a mobile ad (and just two seconds of seeing an ad on desktop), according to the Mobile Marketing Association. That means tons and tons of fancy animation a la this Steve Bullock video likely muddles your message — and turns off potential voters. It’s also probably why Elizabeth Warren is more likely to show you Bailey in her ads than her latest policy proposal (candidates and nonprofits: More dogs in ads, plz).

Biden’s “Three Reasons” ad shares three reasons why he’s running, all ending in “of this nation.” The repetition allows his message to land—and stick—in peoples’ minds. 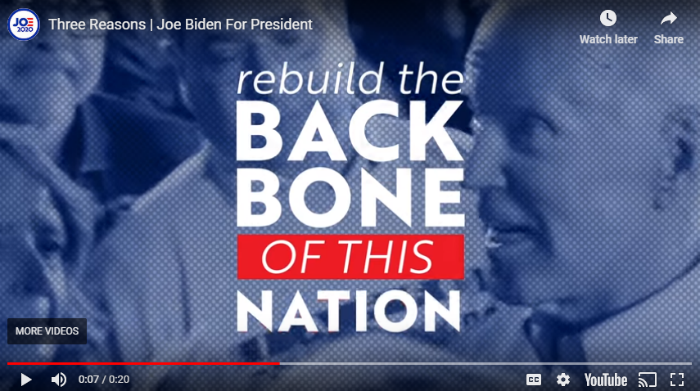 Warren takes the selfie video trend to a whole other level, filming a quick pitch in front of a crowd of supporters. You know how we’re always telling you to show, don’t tell? Nothing says “jump on the bandwagon” like filming in front of a giddy crowd. Instant FOMO. 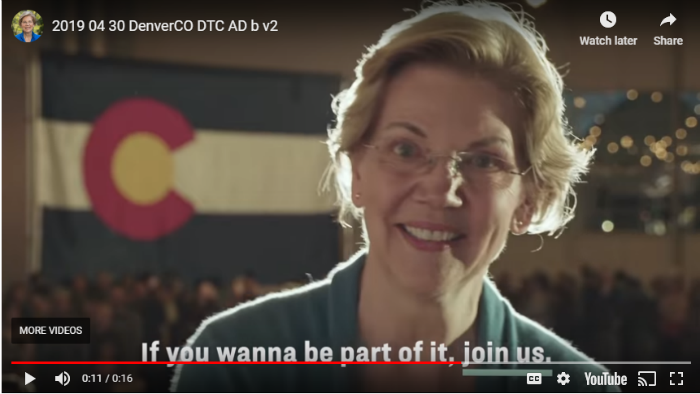 Beto seems to have hired Marie Kondo to advise his digital team. The result is striking—in part because his target audience is already bought into the idea of impeachment. No additional context or selling is needed to get people to act. 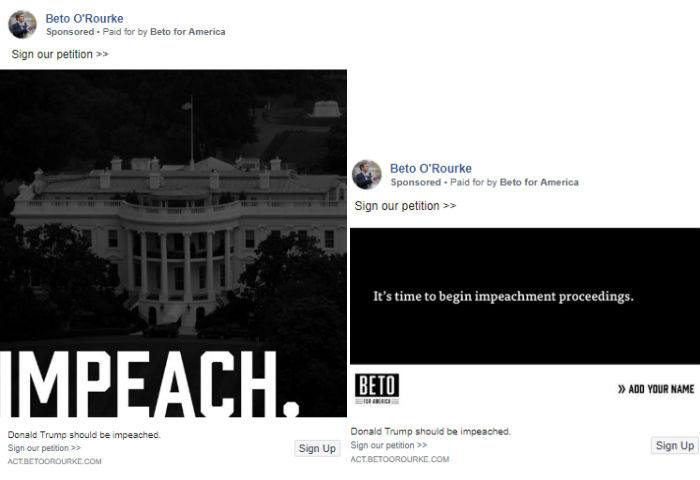 If you, too, love nothing more than learning from what the presidential candidates are doing, send me your screenshots and tell me what you’re seeing/digging/loathing. After all, the October Quarterly deadline’s only 76 days away…

When Gwen’s not scheming up new campaigns or writing dazzling copy, she’s kicking it with her pug Frankie. You can reach her at gemmons@mrss.com.