A crowded newsfeed and inscrutable algorithms make it hard to know how much attention your Facebook posts really get. The following excerpt from our 2017 Benchmarks Study will help you paint a more accurate picture of your Facebook reach.

Once you understand Earned Reach Average, head on over to www.mrbenchmarks.com to find the most up-to-date nonprofit social media metrics from the M+R Benchmarks Study.

If you’re responsible for your nonprofit’s social media, you probably know about how many Facebook fans you have. (If not, go check real quick. Are you back? Okay good let’s keep going.)

Your fan count is the simplest way to know how many people see the messages, calls to action, photos, invitations, appeals, and news you post. Or it would be, if that number weren’t hugely misleading.

You probably already know this song: when you post content on Facebook, not all of your fans see it. Facebook’s ever-mysterious algorithms limit that reach, and by a lot more than many people realize.

In fact, in our 2017 Benchmarks study, we found that on average, a nonprofit will reach just 8% of its fans with a post that isn’t promoted.

We know. It hurts.

You can pay to increase that reach, of course, and that kind of paid promotion can be an effective part of your social media and digital advertising strategy. But the truth is, resources are limited and nonprofits do not pay to boost the vast majority of their posts.

But there’s good news, too! A lot of folks — 45% on average– who do see your posts aren’t your fans (yet). As their friends engage with your content (especially when they click “Share”) it pops up in their Newsfeeds.

So most of the people who follow you don’t see your Facebook posts, and about half the people who do see your posts don’t follow you on Facebook. Nonprofits need a better metric than number of fans that more accurately reflects how many users you can expect to reach. Enter the Earned Reach Average, or ERA.

Earned Reach Average (ERA): the average number of people who see a given post for every Facebook fan you have. 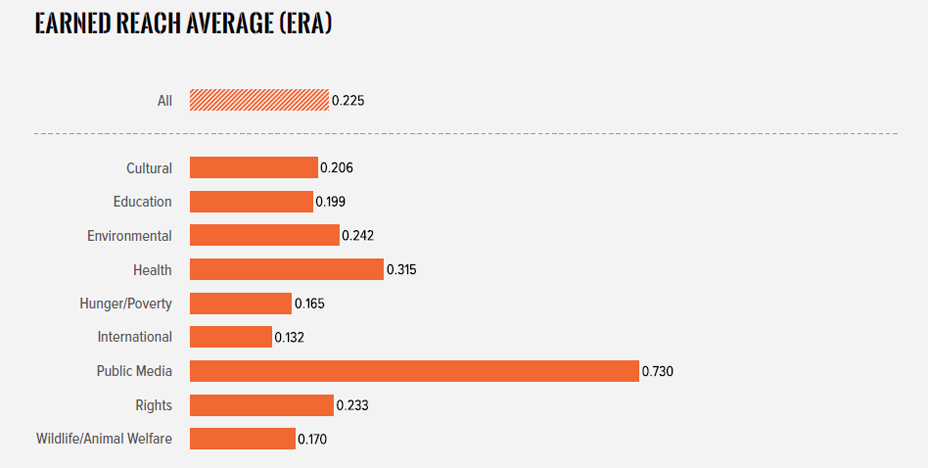 It’s good to have fans, the more the merrier. But so much of your Facebook reach comes down to engagement, shares, and being seen by audiences beyond your existing fanbase. If you want to be seen on Facebook, the nature and quality of your content are just as important as the number of Likes you have.

Now the big question: How do you increase your Earned Reach Average? How do you reach more people on Facebook? We want to help you answer that question, but it’s too much for one blog post. That’s why we’re inviting you to a free webinar on social media.

Social Media for Social Justice: How to inspire and be seen

We’ve taken the lessons learned working with some of the nation’s leading nonprofits and developed a series of free webinars to help small nonprofits win big. Learn more about these trainings.

Find out who *really* sees you on Facebook with your new favorite stat: Earned Reach Average. #nptech #sm4np https://t.co/437W6l1vey