I was SO JEALOUS that I couldn’t have a Facebook account. This was the summer after I graduated high school, back in the early days when you needed a college email address to sign up. Sure, I had a MySpace, but my older friends had moved on to this exclusive new social network. So cool. As soon as I was able to sign up, I started searching my school register for people to be friends with who liked the same bands as me: Rancid, The Distillers, The Bouncing Souls, or any ska band (yes, really. That’s actually still a requirement if you want to be my friend).

If you thought finding someone with your same musical taste is good, just wait until you find people who are as passionate about social media and fundraising data as you are. Actually, you don’t have to wait! We’re right here. Apply to come work with us today.

My, how far we’ve come. Facebook isn’t just for college students anymore—or really at all. According to the Pew Research Center, 69% of U.S. adults use Facebook, and adoption is highest among people 25-49 years old. In recent years, Facebook has created tools for their users to show their charitable side through the platform—first by donating directly to nonprofits, and now by raising money from friends and family for the causes they care about.

Quick note: the Facebook revenue we measured includes all donations made through the Facebook platform. In our study, the vast majority of Facebook revenue (99%) came via the peer-to-peer tool known as Facebook Fundraisers. The other 1% came through donation buttons that could be on a nonprofit’s page or added to page/user posts.

So what did we find?

On average, nonprofits raised $1.77 through Facebook for every $100 raised through other online channels. For some sectors, the impact is even more dramatic. Rights groups, which saw a sharp decline in traditional one-time giving, received $13.02 in Facebook donations for every $100 in other revenue.

And for Health nonprofits, Facebook appears to be nothing short of transformative. For every $100 in direct online revenue, Health nonprofits received $29.88 through Facebook. In other words, for Health groups, Facebook donations accounted for about 30% as much revenue as every other source of online revenue, including email, web giving, monthly donors, digital ads, and search. 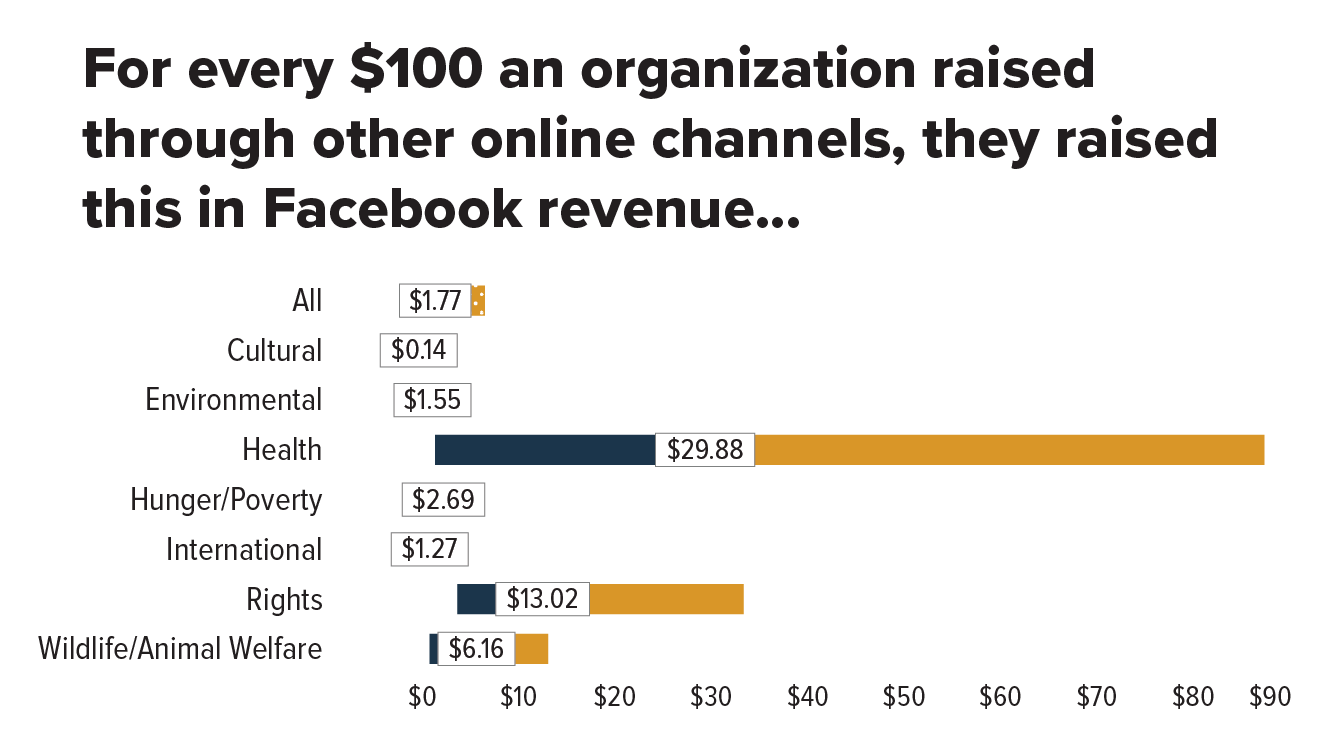 And take a close look at that chart. The white box is the median figure. The blue and yellow bars to either side go down to the 25th percentile, and up to the 75th—anything in that range is what we generally consider “normal.”

We also wanted to take a look at what to expect from a typical fundraiser. We found that the average Facebook Fundraiser generates 7.4 gifts from friends and family. The average gift size is $31.

While the average organization had 56 fundraisers started on their behalf in 2018, there is huge variation from nonprofit to nonprofit and from sector to sector. Just take a look at Health groups (which, as a reminder, are raising much more than other sectors, on average). The average group in the Health sector had 690 people start fundraisers on their behalf!

That means that if you want to reap the rewards of this emerging revenue source, your most effective path forward is to find ways to motivate supporters to start their own Fundraisers.

If you haven’t seen these kinds of results from Fundraisers, you might be feeling as jealous as pre-college, ska-loving, Facebook-less me. Maybe it’s time to get your supporters involved.

Now, we’re not saying it’s easy to motivate people. Setting up a fundraiser is a big, public ask—it’s not something people do lightly. Here are a few pieces of advice as you’re crafting your strategy.

What success are you seeing with Facebook Fundraisers? Tell us in the comments below or reach out on Twitter @MRCampaigns.