If you hadn’t seen a Facebook Fundraiser before June 16, you probably have by now. In fact, you might even be one of the 529,168 (and counting) people who have recently chipped in to help RAICES reunite families that were separated at the border by our administration. 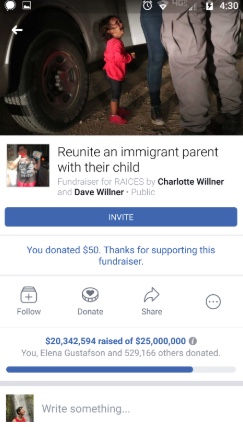 What you might *not* know is that it was not orchestrated by any organization. In fact, it all started with Charlotte and Dave Willner, a regular California couple who set up a Facebook Fundraiser on their personal Facebook page with the intention of simply doing their part to help.

Their simple plea has attracted astonishing support. It’s also made it clear that Facebook Fundraisers have finally arrived as a powerful tool for creating change in the world.

There are a few things you need to know to take advantage of that potential.

Facebook Fundraisers are available to individuals or Pages to raise money for causes they care about. Those could be nonprofits, or they could be their own personal causes, like health or travel expenses. We’re much more interested in the former, and the good news is Facebook waives fees when you’re raising money for 501(c)3 groups that are registered for Facebook’s Charitable Giving Tools.

What makes them better than the donation pages I already have?

The process to donate is seamless — donors never have to leave Facebook to make a gift. If your supporters have given before (even to another nonprofit), their payment info should already be stored. Keeping things quick and easy is one of the best ways to increase conversions.

Facebook Fundraisers are also designed to spread. Facebook will publish your donation to your network (if you allow it) and encourage you to share and invite friends. More sharing = more donors = more good done in the world.

The other great thing about Facebook Fundraisers — which you might know if you’ve had a birthday recently — is that Facebook encourages people to set them up. It does so with a story in the news feed two weeks before someone’s birthday, and can also send them reminders to finish ones they’ve started.

What makes them worse than the donation pages I already have?

Here’s the biggest downside to Facebook Fundraiser gifts: You don’t necessarily get your donors’ email addresses, unless they are very invested in giving it to you (they have to check a box and submit an extra form after giving). This is a major disadvantage, because you aren’t able to follow up over email to thank the donor, give them updates on the impact of their gift, or ask them to support you again.

Because you don’t get email addresses, it’s nearly impossible to track Facebook Fundraiser donations back to your donor database, so the next solicitation you send out could suggest the donor hasn’t given recently and make them feel like you don’t appreciate them. Or you could be asking them for a smaller gift than they are capable of.

You also don’t get email addresses for people who set up Facebook Fundraisers for you. As a page you can go to each Fundraiser and post a “thank you,” (and if you have supporters who make as big an impact as Charlotte and Dave Willner, we would suggest starting there and never stop thanking them). But it can be hard to acknowledge every donor, and there isn’t an easy way to start from the biggest fundraisers and work your way down. Learn more about how to thank your donors here.

So are Fundraisers worth doing?

YES, definitely let people set up Fundraisers for your organization. If you’re not doing that, your supporters are likely raising money for someone else, or they’re raising money for you and Facebook’s donor advised fund Network for Good is taking a portion of it towards processing fees. In order to receive no fees, you’ll have to register your nonprofit with Facebook and then turn it on in your Page settings.

YES, ask celebrities or influencers to set up fundraisers for you. Anyone with a large social media following or potential to snag some earned media can create a splash with a Facebook Fundraiser page (or even a Facebook Live!). It’s a great way to break through the noise and get in front of new donor audiences. Just ask Lin-Manuel Miranda, his mom, and Planned Parenthood, or NBA Champion Steph Curry and UN Foundation’s Nothing But Nets

MAYBE ask your other supporters to set up fundraisers. Just remember, you can’t easily thank them all. If you’re okay with this, you can send them to a page to start that process by using a link like this. And before you ask: no, you can’t set up ads to direct to that link.

Do you already have another tool you use for peer-to-peer fundraising? You can actually integrate that with Facebook Fundraisers using an API. Send this link to your developer to look into it.

PROBABLY set up Fundraisers for your page to raise money from your Facebook fans and their friends. People give you money when you ask them to, so you should definitely ask! But the question is whether to send them to a Facebook Fundraiser or the donation page on your website. You have to decide whether the matchback issues mentioned above (where you can’t match donations to your existing donor database) outweigh the benefits for your organization.

NO, don’t abandon your existing fundraising channels. Fundraisers are quick and easy to set up, and great for small organizations or rapid response. Your supporters will likely find donating in Facebook easier than on your page, especially if they’re on their phone, especially if their payment information is already stored. You’ll get in front of audiences you might not otherwise have access to, and the runaway success of the RAICES campaign shows how powerful Facebook Fundraisers can be in the right moment.

But — and this is important — the difficulty in tracking donors and following up means that Facebook Fundraisers are not the best way to build a reliable base of support. Building long-term relationships with supporters is critical for retention and long-term success, and that’s hard to do when you don’t have permission to keep in touch. So think of Facebook Fundraisers as a useful, potentially game-changing, new part of your program, rather than a replacement for your other efforts.