Heeeeyyy, check it out, it’s finally here! Facebook has launched Facebook Fundraisers, a new peer-to-peer fundraising tool that’s integrated directly into Facebook and allows anyone in the U.S. to set up their very own fundraiser for their favorite nonprofit.

So, yay, we’ve got a fancy, potentially game-changing new tool. But does it work? We’ve been experimenting with different approaches to find that out, and so has our pal Mason Weintraub, Director of Digital Engagement at Oxfam America (they got a sneak peek earlier this summer). We’ve put our heads together to discuss how supporters are responding, which tactics work best, and how to work Facebook Fundraisers into your organization’s online fundraising program.

Here’s the scoop so far! (Spoiler alert: We’re optimistic, and think you will be, too!)

How does this Facebook Fundraisers work, anyway? Real quick, according to Facebook: “Fundraisers let people raise money for your nonprofit on Facebook. Your supporters can set up a dedicated page to share their story, tell others about your mission and rally around a fundraising goal.” They’re even encouraging people to set up fundraisers for the nonprofits they like and interact with! Exhibit A: 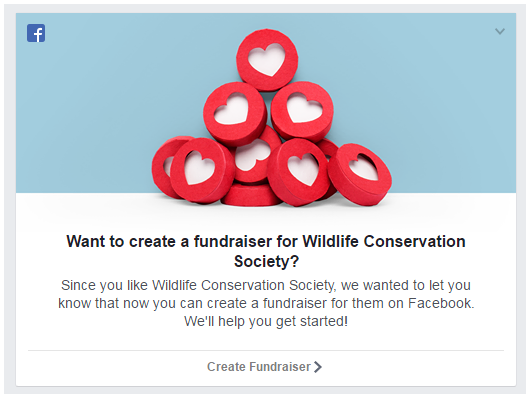 What’s the coolest thing about it? Audience! Of course! It’s a Facebook tool (vs. a tool that has some Facebook integration), which means your campaign has a built-in network. It makes it easy to solicit your friends and family because you don’t have to direct them to another platform — the tool is right there in Facebook. Facebook is also promoting this heavily, so friends are likely to see activity around a fundraiser and be encouraged to join in.

What’s a NOT as cool thing? Donors have to opt-in to sharing their information with the group they are giving to, so this means you’re not guaranteed to get the email addresses of people who donate to you through friends’ fundraisers. You don’t even get email addresses for the people who fundraise for you!

So should I move all my peer-to-peer fundraising to Facebook? Not so fast. There are other, really well-established peer-to-peer platforms out there that have done a lot of work to make their products work well for nonprofits. They have sample text for donation pages, ways to send fundraisers “coaching” messages, and built-in milestones and rewards — all things Facebook doesn’t have (yet). So if you already have a big peer-to-peer program, don’t abandon it. Just know that some of your supporters might choose to use Facebook instead, or in addition. Embrace it!

Bonus! One other cool potential use for the tool: When a crisis occurs, people turn to Facebook to share news, concern, and ways to help. Thus, Oxfam is considering using Facebook Fundraisers for post-emergency fundraising; in the face of a humanitarian emergency that’s getting significant media attention, they’d deploy the tool early on to help people get more involved in responding to that emergency. 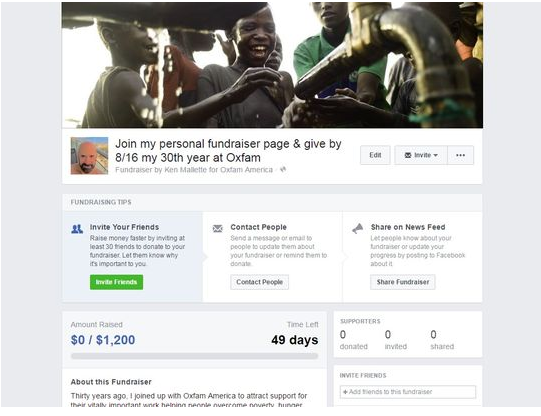 Mason’s colleague Ken Mallette set up a personal fundraising page for his 30th anniversary with Oxfam.

Mason’s experience at Oxfam and our own “kick of the tires” shows real promise. If you’re interested in getting your feet wet, you can learn more from Facebook here.

What’s the deal with Facebook Fundraisers? Here’s the scoop from folks who have tried it. https://t.co/6hHAwTAXZM #nptech