How Cross Promotions Can Help Your Organization

Sharing lists for fundraising outreach has long been accepted as a cost-effective practice in the direct mail world. But list sharing has yet to be applied to online lists in any great numbers. Many nonprofits are held back by fears over negative impacts to their email lists or the quality of the new supporters. Others are simply uncertain about how online cross promotions (or “list swaps” or “list chaperones”, as they’re sometimes called) work. That’s why we put it to the test.

First off, we do want to state for the record, a cross promotion does not involve actually swapping lists, and there is absolutely no spamming involved!

We helped two organizations with similar missions, the League of Conservation Voters and The Wilderness Society, coordinate a cross promotion in July 2007 and then two years later, took a look at the results…

An online cross promotion doesn’t work like a direct mail list swap, where two groups literally swap lists. Instead of actually trading lists, the two nonprofits each send an email to their OWN list, promoting a link to the other nonprofit’s web site. Each nonprofit acquires only the names of people who affirmatively opt-in on their web site by taking action. 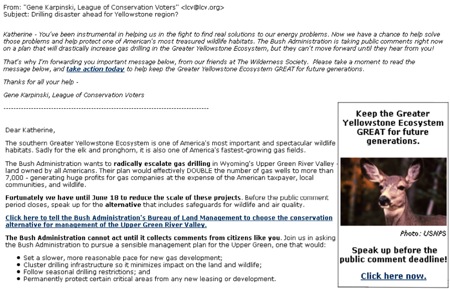 The results: a net win for advocacy and fundraising

A lot of groups might worry about doing a cross promotion, because if your supporters start getting more email from another nonprofit, obviously they are going to be less likely to take action for your nonprofit. Happily, our study found that the reverse was true!

What does this mean for advocacy? In this case, the cross promotion was a win-win. Not only did the original supporters take more actions, but each group now had a whole new group of people to support their advocacy efforts because of the list growth from the cross promotion.

What about for fundraising? For this cross promotion, we found no statistical evidence that the cross promotion had any negative impact on the giving behavior of supporters that participated.

While we didn’t see the same sort of increase in response rates that we saw for advocacy, the fact that cross promotion participants continued to donate at the same rates as they had in the past was good news. As long as you aren’t turning off existing donors, the cross promotion only improves your fundraising efforts because it increases the number of people from whom you could raise money.

What’s the down side?

Before you decide to cancel all viral campaigns and only pursue a cross promotion strategy for list growth, here are three things to consider.

1. New recruits tend to unsubscribe at a higher rate. For each group, the new recruits unsubscribed at a higher rate than the list-wide average, but that increase varied quite a bit. For one of the two groups, those who participated in the cross promotion also had a higher unsubscribe rate in the following two years, meaning they lost a larger portion of this group than they otherwise would have. The difference in unsubscribe rates between the groups suggest the need for a solid messaging strategy. Be sure to send your new supporters your best, most engaging content so they stick around!

2. No two organizations are the same. These two organizations have complementary but not identical missions and campaigns. Their results may not hold true for every combination of organizations, so pick your cross promotion partner wisely. You’ll have the most success if you partner with a group that is complimentary to yours and attracts donors that care about the same types of things as your donors, but runs campaigns around slightly different issues.

3. Don’t put all your eggs in one basket! If you rely solely on cross promotions with other groups for new recruits, you will eventually have fewer subscribers eligible for a cross promotion and are likely to get declining results. Be sure to use a combination of recruitment tactics to grow your list with a diverse group of activists and donors.

What was our methodology?

The following subgroups were suppressed from the initial cross promotion and thus not included in either the test or control group:

How do I run my own cross promotion: six simple steps

That’s it! Do you have more questions on our cross promotion study or how to conduct your own cross promotion? Please don’t hesitate to get in touch with us.

Acknowledgments
We’d like to thank the League of Conservation Voters and The Wilderness Society for providing us with the data for this study. We would also like to thank Andrew Stocking, PhD economist from the University of Maryland, for his help completing the data analysis for this study.

Finally, we would like to give a special thanks to Convio, for their generosity in providing us with years of data for both the League of Conservation Voters and The Wilderness Society.