Want people to like you? Go on, don’t be shy. Just ask them!

Facebook “like” drives are an increasingly common practice for non-profits that want to connect with more supporters on Facebook. Most “like” drives offer an incentive of some kind in exchange for “liking” a Facebook fan page: A special offer where $1 will be donated to your organization for every “like;” some exclusive content that will be released once a page hits a certain threshold; or promising that your CEO will dye her hair blue when the “like” goal is reached. (Note: we have yet to convince any of our clients to try that last one.)

And it turns out, there’s one more tactic that can make your “like” drive significantly more successful and which I promise will take you about as much time as it took you to put on your shoes this morning: using subject lines in your promotional email that tell people exactly the kind of message they’ve received.

The result? The open rate for both messages was comparable, but people who received the version with the descriptive subject line were nearly twice as likely to click through. That’s the version we sent to the rest of the list.

Due to testing done by other organizations, we suspect that using the word “Facebook” in the subject line (in addition to mentioning the match) provides a fairly substantial boost to performance – but as always, we’d encourage you to test it yourself to see what will be successful for your list.

By the end of the “like” drive, American Rights at Work had more than doubled their Facebook following, and generated a ton of impressions, likes, and comments for their new posts.

(Oh, and if you want to get the latest news and information on workers’ rights, American Rights at Work can be found on Facebook here.) 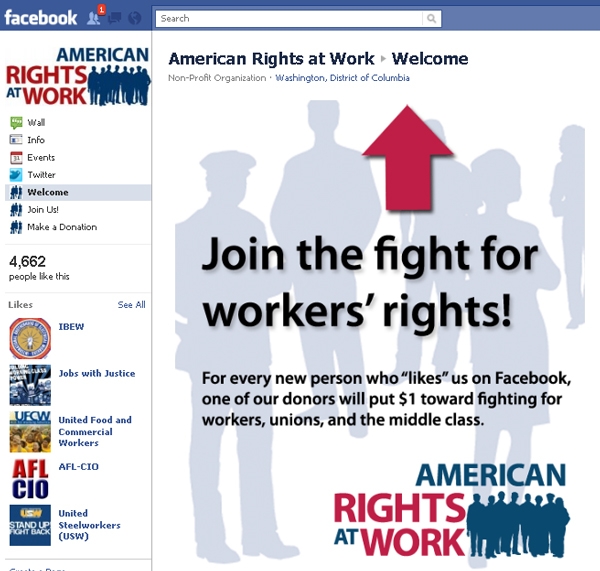