Make it easy: Use one checkbox to transform your membership program

Two things that are hard: thinking and remembering. That’s why businesses thrive when they don’t ask customers to think and remember, and instead automatically renew our subscriptions and memberships. It’s how Netflix works, and US Weekly subscriptions, and why you still get strange eggplants that you don’t know what to do with from your local CSA. But is it how your fundraising program works?

You might think you’ve got this covered with your monthly giving program, harnessing the same philosophy as the for-profits and locking in that reliable revenue month by month. Which is vital, but if that’s the only way you’re helping donors give regularly without having to think and remember, you could be leaving a lot of money on the table.

The thing is, monthly giving isn’t for every donor. Even for League of Conservation Voters, with a robust monthly giving program that has more than quadrupled in size in the last two years (a blog post for another day perhaps!), the number of monthly donors is still dwarfed by the number of people making one-time membership contributions.

So we asked: what if we apply the same automatic giving approach that works so well for monthly giving to these one-time donors?

The setup is pretty simple. Here’s the donation form we set up for LCV’s 2013 Membership Drive: 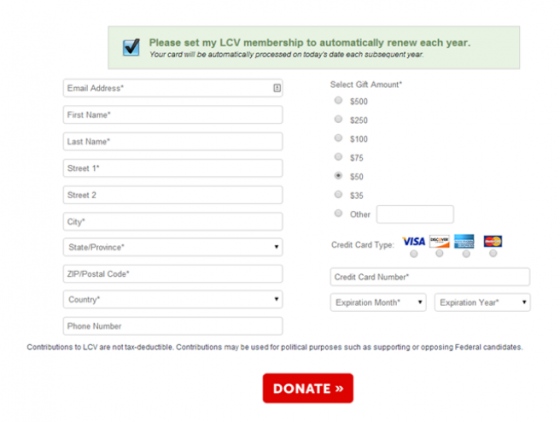 It’s a standard form, except you might have noticed that there’s a big honking green checkbox that sets LCV membership to automatically renew each year. The box is pre-checked: by default, we’re asking everyone to set their membership to automatically renew. The box is very prominent, and it’s easy to opt out – we’re not trying to trick supporters here – but pre-checking makes it that much easier to choose to auto-renew. And if you agree to autorenew, it works just like monthly giving, only on a longer timeframe. One year from the date of the initial gift (and each subsequent year after that), that same donation will process on the same credit card.

In January 2013, we launched our first Membership Drive using this feature. By the end of the campaign, 56% of membership contributions were set to autorenew. The implications were huge – in theory, more than half our donors would come back next year without even being asked! No thinking, no remembering, easy as pie.

But the proof of this particular pie is in the eating of the pudding. Or something. The point is, we couldn’t know how well the strategy worked until we got results a year later, in January 2014, when we would answer two key questions. One, would LCV members forget that they set their gifts to autorenew and rise up angrily at the unexpected charge? Two, how many credit cards would expire in the intervening year?

We were especially nervous about the first question. So early in January 2014 (a couple weeks before any of the gifts were set to process), we sent out a Membership Renewal Notice to everyone who was set to autorenew. Just a quick note to remind donors of the amount of their gift and when it was set to process, and to give them the opportunity to cancel or change their gift. A small number of donors cancelled; others increased their contribution. Question One handled, on to Question Two.

Later that month, autorenewals began to roll in: 66% of the gifts that were set to renew processed as expected (the remaining were primarily people with expired cards). Autorenewal revenue accounted for more than a quarter of the revenue in LCV’s 2014 January Membership Drive – which was, by far, the most successful Membership Drive the organization had ever run. Afterwards, we were able to recapture a chunk of those expired donors with a two-message credit card decline series. 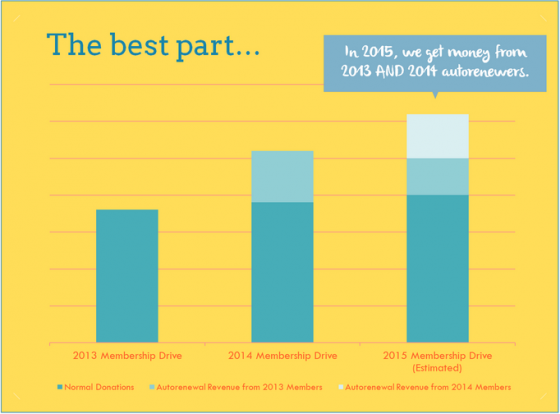 All that from adding a checkbox to a membership donation page, and remembering a simple truth about online fundraising. Thinking and remembering are hard — it’s our job to make supporting our cause easy.

Are you making it easy?