When you’re trying to meet a potential mate, date, friend, or luge partner, the first impression matters. And as anyone who’s been in this biz for a while knows, working with reporters isn’t all that different from navigating a crowded bar scene. Your first impression has the potential to make or break the relationship, the difference between the warm embrace of extensive coverage and lonely nights shut out of the news. And that means subject lines are critical.

A reporter at Politico recently bemoaned the state of her inbox on the night of the State of the Union. Her biggest gripe? She gets too many emails…many of which are saying the same thing. We thought the screenshot of her inbox was fascinating – so we got out our yellow highlighter and had some fun. 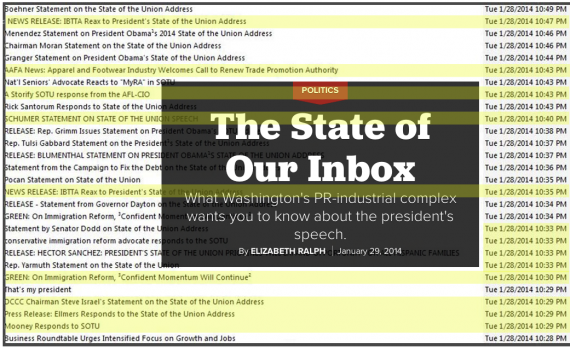 As members of “Washington’s PR-industrial complex,” even we have to admit this is ridiculous. In less than 30 minutes, this reporter got 28 head-tilting, long-winded, and so-bad-they’re-funny subject lines. AAFA News: Apparel and Footwear Industry Welcomes Call to Renew Trade Promotion Authority? I mean, come on.

Unfortunately for journalists and for nonprofit communications officers trying to get noticed, the volume of email that reporters receive will never go down. So how can you stand out in the crowd? Let’s take a closer look at a few of the subject lines to find the do’s and don’ts for your next email to a reporter:

Don’t be a creep. You wouldn’t normally email a total stranger, so why would you email a reporter you know nothing about? By referencing a recent and relevant article of theirs in your subject line, you can break the ice. The International Bridge, Tunnel & Turnpike Association (IBTTA) should personalize their subject line the next time they have a “reax” to something.

Don’t get sloppy. Space is limited in the subject line, so don’t waste it with poor grammar, punctuation, or too many words. Short, simple, and literate should be your motto. For example, starting your subject line with “Press Release” is a waste of space. And we’re pretty sure a reporter at Politico knows what SOTU stands for without you spelling it out. Good job, Mooney:

Don’t give it all away! Catch the reporter’s eye but save the real seduction for the body of the email. Pique their interest with the subject line so they want to go through all the work of clicking on your email. When everybody else was trying to entice reporters with a boring “statement,” Green gave a taste of something specific to look forward to in the email. Meanwhile, “That’s my president” does raise eyebrows – but not in a good way.

Be original. We’re really intrigued by the AFL-CIO’s “Storify SOTU response” and we bet reporters were too. It’s different, on topic, and from a credible source. It’s the one and only subject line we’d give an ‘A+’ in the whole bunch.

You don’t have to scream to get noticed. For the first time in ever, we’d rather hear what Rick Santorum has to say than Senator Schumer because at least Santorum’s press secretary knows how to turn off the caps lock.

Don’t wait until the last minute. Reporter’s inboxes can resemble last call at your college watering hole while you’re 4 people deep and holding out your $20 hoping the bartender takes pity on you. This email rush is particularly true around big events like the State of the Union. Make the connection with reporters early on so that they’ll remember you or look out for your email when their Outlook starts chiming 10 times per minute.

Call (or email) the next day. Reconnecting in the days after your first email encounter is an important way to build a relationship that lasts. Once the excitement has passed, begin to learn more about their (journalistic) interests so that you can be prepared to help plant the seed for the next big story. Chances are, the reporter wasn’t going to have room in her SOTU story for a quote from the Footwear Industry. But she might have time later in the week to talk more about it.

Subject lines don’t just matter in the emails you send your nonprofit’s supporters. They’re also important in the emails you send to media. So take an extra minute to get the subject line right next time and you’ll be on your way to a long and happy relationship with your future significant reporter. We know it’s a bit more work, but who ever said true love was easy?