“M+R does it all, we trust them.” John Seager, CEO, Population Connection

Population Connection’s Helms campaign is proof that a strategic combination of press + social media + online advocacy + on-the-ground organization can finally uproot a policy that has been killing women worldwide for nearly half a century.

In the summer of 2015, Population Connection asked M+R to develop an integrated campaign to repeal the Helms Amendment – a 1973 law that has banned U.S. foreign aid for safe abortion access. After a robust strategy session and a series of conversations with other insiders from the field, we concluded that while repeal might be the ultimate goal, to get there we needed to take a step that no other group had tried.

Instead of targeting the then-Obama White House and Republican Congress to repeal or reinterpret the law, we aimed for presidential candidates on the campaign trail to get them to commit to fix Helms in cases of rape, incest, and life-threatening pregnancy.

By October we were on the ground in the primary states of New Hampshire and Iowa. We got activists there to target candidates with questions and iPhone cameras at events. Then we used the intercept videos to engage online activists to sign petitions and chime in on social media. We also shared them via email and Twitter with progressive and political reporters from Washington Post, Refinery29, Huffington Post, and VICE, who started to pick up on the overlooked issue as an important piece of the reproductive rights platform.

As a direct result of our strategy and execution, we had a campaign breakthrough in February 2016. We got both Hillary Clinton and Bernie Sanders to go on the record committing to fix this deadly policy. 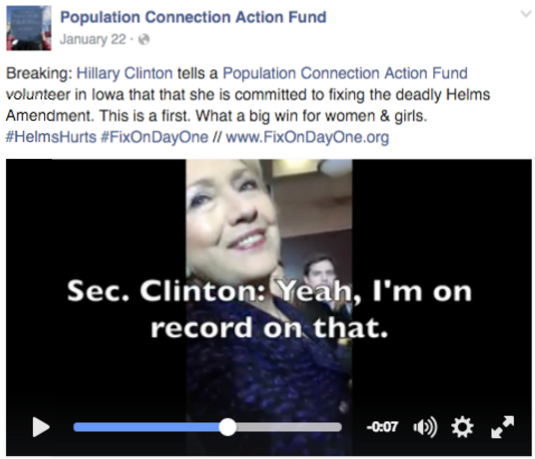 The Huffington Post carried the news and the New York Times editorial board solidified the Clinton and Sanders support when they featured the Helms campaign win as a key piece of their March editorial:  What the Election Means for Reproductive Rights. 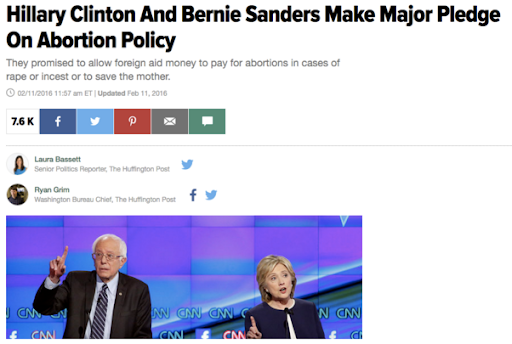 We all know that a candidate’s pledge to change the terrible policy isn’t enough though. The campaign needed to make the commitment irreversible. So we once again fired up Population Connection’s 600,000 online supporters, pitched the press, and worked behind the scenes of the Democratic National Committee platform committee to add repealing Helms to the DNC platform.

The actions worked. Twelve months after we started planning and six months after a grassroots supporter asked Hillary Clinton a question with an iPhone, the entire Democratic party called for the end of Helms. The Vox headline that day read that the repeal is “A Big Deal.”

Then in November 2016, you may remember what happened next. 🤦‍♀️

Population Connection is still fighting for change. And we are by their side all the way.