Anyone can snap a selfie with the doggy ears filter. And anyone with excellent taste (me) can make heavy use of the rainbow vomit. Exhibit A: 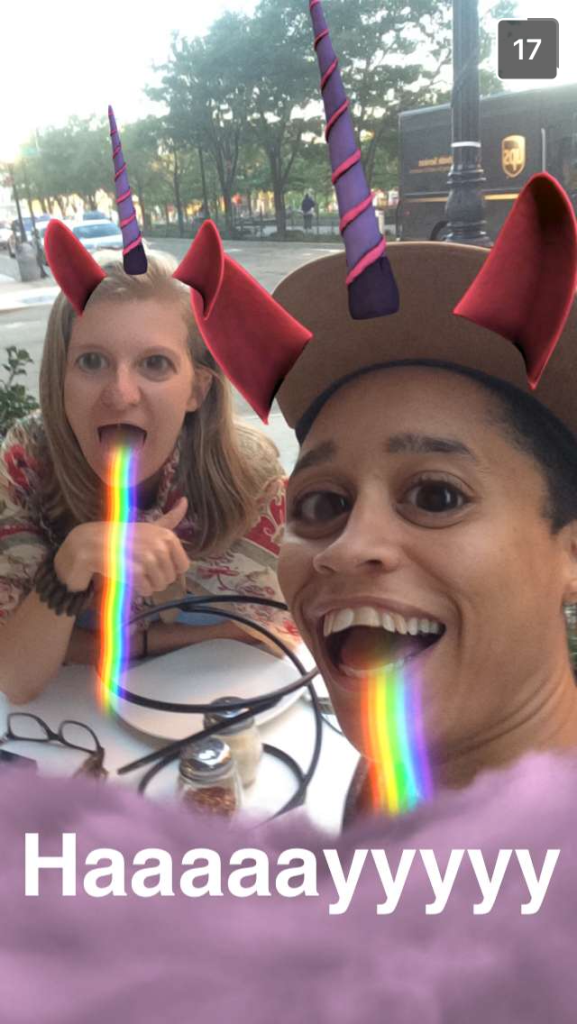 But a real Snapchat superstar uses her powers for something loftier: pressuring Congress, speaking out on urgent issues, and saving the world.

It really is a snap (apologies in advance for the really good snap puns herein). Before you get started, here are a few important things you should know.

Snapshot
Snapchat has 200 million users, half of whom are daily active users. That’s 100,000,000 sets of eyeballs every single day. Snapchat is also the fastest growing social media platform, reaching about 41% of all 18-34-year-olds in the United States (compare that to, say, television, which only reaches 6% of that demographic).

After the music industry, politics is the most active industry on Snapchat, based on number of accounts opened and ad spend. Yes, politics!

So that floating ghost is great for more than just swapping faces and lightly stalking your crush. It can be a super useful and creative tool for political action—from engaging with younger audiences to actually making change happen.

Snapping on – and at – The Hill
Snapchat is different from other social media because your organization and advocates have direct access to members of congress and state legislators.

Snapchat accounts can’t be managed by staff as easily as Twitter or Facebook can because the nature of a snap is that we can see who is doing the snapping. This means legislators’ level of involvement in this platform has to be higher than other platforms.

There are an increasing number of legislators using Snapchat. U.S. Rep Eric Swalwell (D-California—@RepSwalwell) was recently crowned the Snapchat King of Congress. He snaps both on the Hill and back home in his district, interacting directly with constituents on a daily basis. 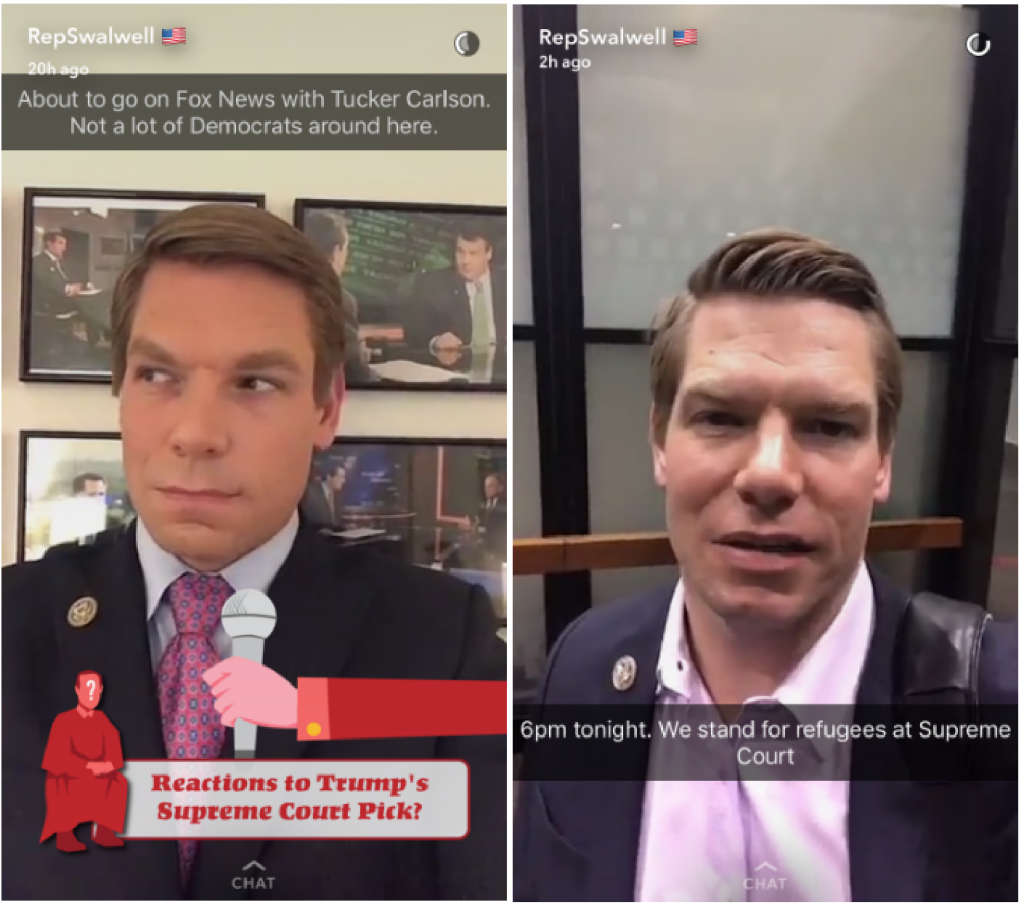 He also has nice hair.

Want to find out if your Congresspeople/that key swing vote for your cause is snapping? The Public Affairs Council keeps an updated list of members of congress with a Snapchat account here so be sure to go add them all to your friend list!

Make It (Snap, Crackle and) Pop

Once you’ve located your representative of choice on Snapchat, get those thumbs moving. Organizations have discovered that snapping at MOCs can be even more powerful, more immediate, and more intimate than sending letters, emails, or even tweets — and they’re using this to their advantage.

Integrating Snapchat into your advocacy doesn’t have to be a heavy lift (and your organization doesn’t even need to have its own account to do it!) Here’s the basic how-to:

Planned Parenthood recently leveraged Snapchat as a way to bolster their messaging on other platforms by using the #WeWontGoBack hashtag across social channels. They took to Twitter and Instagram to get supporters to add them on Snapchat then used geofilters at actions all around the country. As advocates took snaps of the protest and of themselves, Planned Parenthood accounts encouraged advocates to send these snaps to their MOCs. 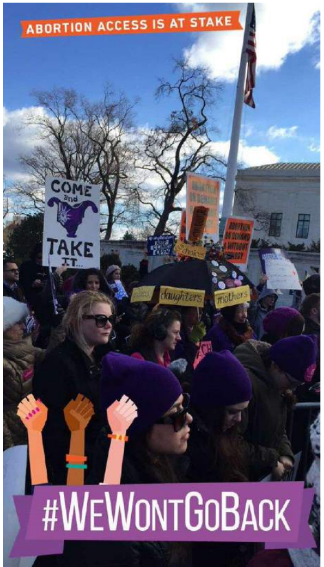 Another fun tactic that’s both high-impact and easy to implement is using geofilters. Your organization can start doing this right away — you don’t even need a Snapchat account to do it!

Geofilters are customized overlays for snaps that can only be accessed by users who are in certain locations. The best part is you have extremely nuanced control of the location — for example, you could buy a geofilter for three hours along a very specific protest march route. It’s a great way to increase visibility of your actions and events since both supporters and any random passersby (plus all their friends who get the snaps) will see the filter.

Our friends at #ExxonKnew used a geofilter to surround Exxon’s annual shareholders meeting last year in downtown Dallas. Even though the plutocrats inside the meeting probably weren’t super Snapchatters (hard to hold the phone when your hands are covered in oil and blood and more oil), the hundreds of protesters and reporters outside were. Anyone who opened their Snapchat between 8am and 3pm would see the #ExxonKnew message and feel the campaign’s presence in their hands. 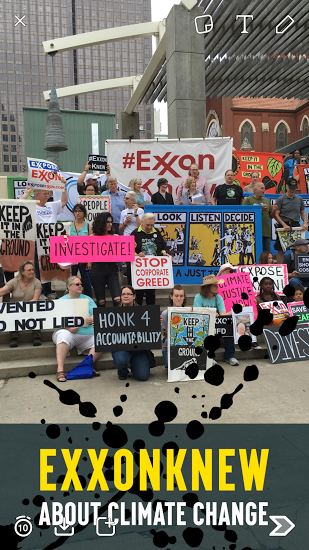 And If You Remember Only One Thing…Make It Snappy

One last word of advice if your organization is new to Snapchat: the platform is inherently less formal than any other social media platform, so be sure to lighten the tone in your messaging. Even if you don’t use emojis or silliness in your regular messaging, you definitely should in Snapchat. Accounts for “serious” organizations like CNN, Huffington Post, Wall Street Journal, and plenty of others use Snapchat stickers, emojis, and drawings on the reg…and you should, too! ???? ????????

If you need some Snap-spiration, World Wildlife Fund, PETA, Oceana, Greenpeace, Human Rights Campaign, and Charity Water are just a few organizations that have strong Snapchat games going right now. Check ‘em out, add ‘em, and then go forth and snap!

Not using Snapchat for advocacy? Here's how to get started (and why you should): https://t.co/tvoG0Teswc #nptech