Donald was a deeply committed colleague, a lifelong and tireless advocate, the brains behind many movements that exist today, and an inspiration and friend to many of us in the social change universe. And, yes, also the reason M+R exists.

But here’s the thing: founding and running M+R is just one of his many accomplishments. Just one! Donald was one of the original (Ralph) “Nader’s Raiders,” tasked with traveling the country and turning college student energy into student advocacy groups. The result was the Public Interest Research Groups (PIRGs), based on the premise that you can not only train generations of college students about activism but win campaigns along the way. Many of M+R’s early staff were part of this entirely novel idea.

Donald went on to lead New York’s PIRG (NYPIRG) into a powerhouse of an advocacy organization and organized one of the largest protests of the 1970s with 100,000 people on the mall in DC. When we say that M+R has its roots in organizing, we mean it. The seeds of the Bans Off Our Bodies marches we helped organize just this past weekend were planted long ago, by Donald and those around him. 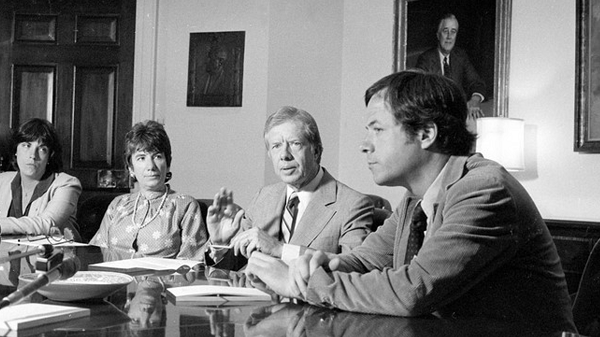 After seeing the 100,000 person No Nukes rally from his helicopter, Pres. Carter summoned Donald (at far right) and the other event organizers to the White House.

With his long-time collaborator Artie Malkin (the M), Donald launched Malkin & Ross as the first of its kind public interest lobbying firm in NY in the late 80’s, and when NY got too small for the kind of change they envisioned, M+R was born as a way to more deeply impact national policy.

From the beginning, Donald’s dedication and resolve drove our firm to work on the big issues of the day. He led the effort to restore public broadcasting funding from Newt Gingrich. He pioneered the advocacy to link public health with environmental causes. And he knew that the marriage of public affairs, media, and digital campaigning was the future. Not all firms made that leap, but Donald made sure that ours did.

While Donald is often known for his work shaping environmental policy, the work that has inspired many of us most is his truly visionary efforts here at M+R to reform the juvenile justice system. Well into his 60s, Donald traveled the country and learned everything there was to know about the US’s cruel and ineffective juvenile justice system. He then worked with the MacArthur Foundation and the amazing Susan Stamler on strategies that helped pass over 150 laws in 37 states that kept kids out of jail, provided supportive services, stopped shackling, and improved their chances when rejoining society.

There is so, so much more. Donald had many accomplishments — as Director of the Rockefeller Family Foundation he transformed it into a campaign-focused philanthropy, he started the Environmental Grantmaker Association to help coordinate effective environmental funding, and Chaired Greenpeace’s Board as the org underwent a reorientation toward grassroots mass mobilization in the 2000s.

A lot of folks say the name M+R without knowing much about what those initials stand for. The fact is, they don’t just stand for a person’s name. They stand for standing for something. They stand for a man who stood for something in this world, who worked for what he believed in, who never stopped. We are so proud to be part of the company Donald founded, with our roots in justice and organizing. The next time you say our name, M+R, I hope you’ll take a moment to remember our R and what he stood for, and let it be an inspiration to you, in your work, and a reminder to stand for something.