Three tips from a Millennial to take your SMS program from ? to ?

The thing about  this stereotype is that it’s true. I know, I’m one of those millennials! Mobile communication isn’t something we consciously learned, it’s who we are. We don’t know any other way. It’s in our blood and our bones and buried deep in our brainstems, along with The Sims cheat codes and every single lyric to Smash Mouth’s All Star.

Reaching ME, or really any of the millions of Americans who rely on their cellphones for everything from banking to dating to donating to tracking down an elusive Charizard, requires nonprofits to get super comfortable with using mobile for fundraising and advocacy.

Texting gets you up close and personal with your supporters, which can be super effective for deepening supporter engagement, peer-to-peer recruitment, and more. At the same time, your supporters are likely getting more comfortable with being texted by organizations – these days, I even get text messages from the IRS. (My federal tax return was accepted!

Smartphones have made it possible to include links, pictures, and other rich media in SMS messages to your supporters. But your supporters might not be using a smartphone – one-third of Americans don’t own one. Even if they do, the process of having to click a link, scroll down a page, then type in information on a tiny keyboard can hurt conversion rates.

That means it doesn’t have to be fancy. It DOES have to be easy. Easy for your supporters by allowing them to donate or take action right within the message itself.  We loved this SMS driven call-in action from Everytown – after a series of SMS messages, the constituent gets a call from Everytown with instructions for what to say, then gets connected right to a target’s office.

Here’s the great thing about this tactic: since the interaction itself is so easy and intuitive for your supporters, you can ask them to put a little bit more work into the advocacy action. Use this to gather petition signatures, generate phone calls to lawmakers, recruit volunteers for your next event or canvass, collect personal stories and testimonials, and on and on and on.

No one wants to chat with a

. (Unless it’s SmarterChild, the AIM chatbot who was my only friend in middle school. See, I told you I grew up like this.) When your group’s text messages sound like they were written by an actual human, they’re more likely to get read and responded to.

Hillary  Clinton’s campaign has been leaning into this technique with debate-commentary texts from “Jess”. Here’s a sample: 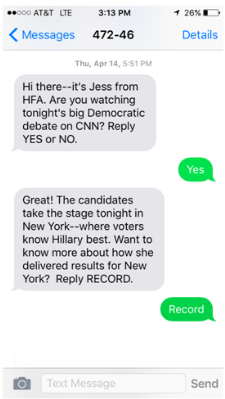 This isn’t new – it goes for every medium we use to communicate with supporters. For a more in-depth look at injecting some personality into your communications, see our Emotional Copywriting Tips for Robots and Humans. And the next time your campaign has a breaking news alert, think about testing a different perspective. Can the update come from a scientist who is standing in the bay? Your plaintiff who has just left the courthouse?

SMS lends itself to the type of viral sharing that can make a big splash for your organization.

to a Connecticut mayor for every text they received about his disparaging remarks toward the Latino community.

Whether you want to use this tactic to deliver bagels to a food pantry, light candles at a vigil, or something even more out of the box, the possibilities are endless.

And SMS also makes it easy for engaged supporters to invite their friends – all someone has to do is text in a shortcode and boom, they’re on your list.

One last thing. Maybe you don’t really get Snapchat. Maybe you prefer email to texting, and letter-writing to either. Maybe you miss the days of faxing petition signatures to the governor. That’s cool! I’m not here to judge you.

But if you’re struggling to figure out a mobile comms plan, you should think about bringing in someone on your team who feels at home in this environment. There’s a lot of value in feeling comfortable in the mobile medium, and sometimes that just can’t be faked.