Earlier this year, the president of the United States said I should get married. Well, okay, not just me specifically — he included some other gay folks as well. But I’m still calling that my highlight for 2012, and yes, he’s getting an invitation.

From stopping SOPA to reviewing binders full of women to reading each and every one of the roughly eleventy zillion fundraising messages from the Obama campaign, there was a lot to love about 2012. Read on for a look back at the coolest, slickest, funnest, kickassingest projects M+R and Watershed worked on this year with our amazing clients:

1. We won the election. You’re welcome.

Ok, we had some help (including from the former M+R staffers who helped power the Obama campaign’s online efforts), but I feel pretty comfortable taking credit on this one. Two particularly fun projects:

We used innovative data analysis and an online pledge campaign to identify potential volunteers for the League of Conservation Voters, then plugged them into LCV’s on-the-ground organizing by the thousands — resulting in big losses for some of the most anti-environmental candidates running this cycle. Take that, Big Oil.

We also spearheaded the Human Rights Campaign’s Call4Equality effort, where supporters around the country could easily call all their Facebook friends who happened to live in the four key states with big marriage battles. And yeah, as you might have heard, that went pretty well.

2. We sent seniors flying through the air

And nobody was hurt! To help AARP promote its 2012 Voters’ Guide, we created an interactive website — ListenPolitician.com — for users to choose and customize an attention-grabbing video. Shoot a senior through the air at a Congressional office. Build a human pyramid. Fly someone in with hot air balloons. Or really, just vote. 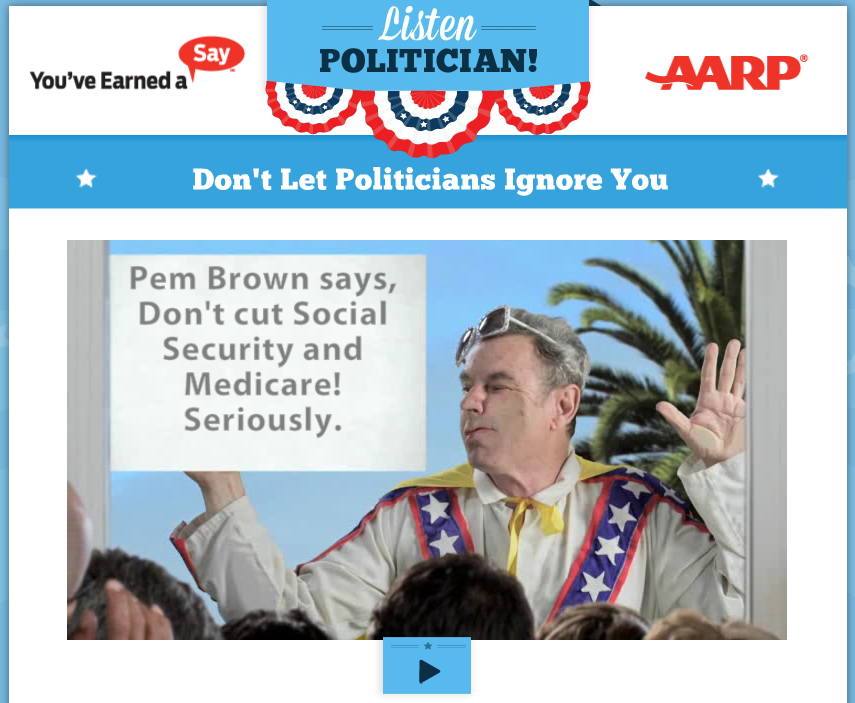 3. We asked a lot of questions

Real talk: I’m terrible at trivia. It never stops me heading to the bar on trivia night, but you probably don’t want me on your team. So I hope you did better than I did on the fun, informative, and oh yeah, effective — some of our top list-builders of the year — quizzes we created. Planned Parenthood highlighted the most absurd and outrageous attacks on choice this election season, while Slow Food asked the hard questions about Thanksgiving (no, not “what is a nog?”). And for the nerds out there, check out Mozilla’s personality quiz. 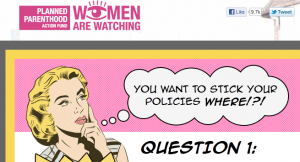 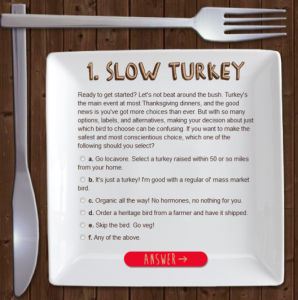 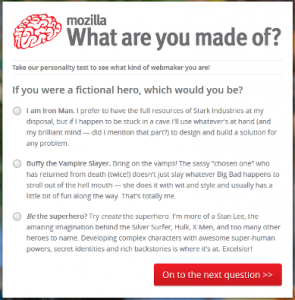 One of the best parts of working at M+R is getting to be on Facebook for my job. And we know we’re not the only ones on Facebook all day long — so we make sure our clients go where their supporters are. We learned a lot about the pitfalls and possibilities of Facebook image shares and helped our clients create tons of them in 2012. Here are a few favorites: 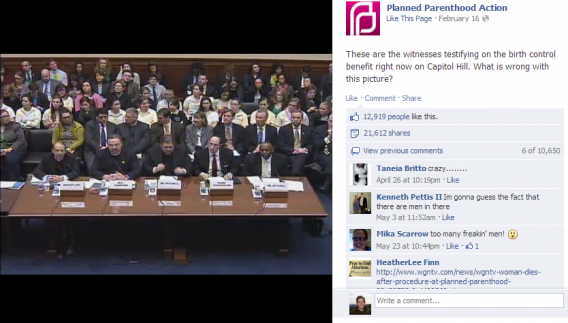 Congress wanted to talk about birth control and didn’t invite any women. Ridiculous.

We created this image for Green for All immediately after a Romney debate zinger where he chastised President Obama for not being friendlier to dirty industries. 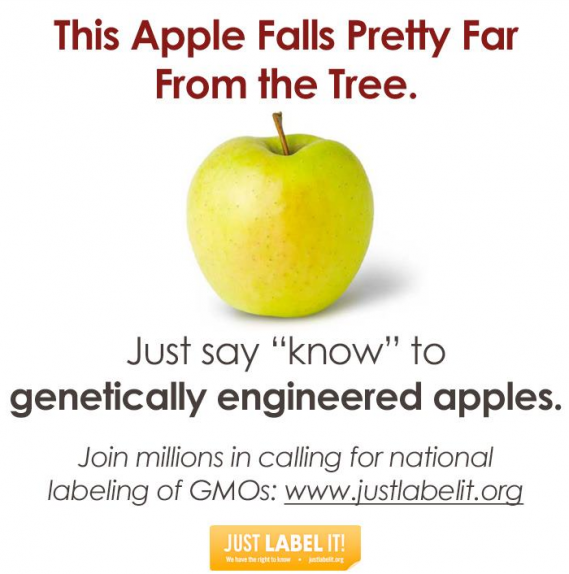 We hit close to home for the Just Label It campaign. 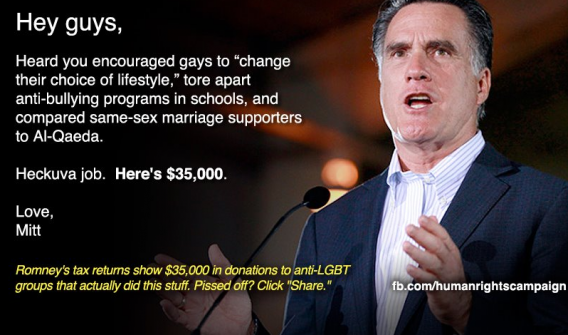 When the Human Rights Campaign exposed Romney’s $35,000 in donations to anti-LGBT groups, we brought the snark to Facebook.

5. We partied with Brad Pitt!

Well, “partied with” might be a little strong — but we did come a couple of degrees of separation closer. Brad did more than plan a wedding and star in creepy Chanel No. 5 ads this year — he also lent his voice and rugged good looks to HRC to promote marriage equality.

And it wasn’t just the Bradster. In 2012, we helped our clients get the most out of working with Robert Redford, Al Franken, Julianne Moore, Bill Clinton, Chelsea Clinton, Al Gore, Aziz Ansari, Mary J. Blige, Scarlett Johansson, Eric Schlosser, Morgan Freeman, Jon Bon Jovi, and Ben Stiller to raise awareness, raise money, and in the case of Chelsea Handler, raise what I like to call the “blood-alcohol level of discourse.” Don’t miss some of our favorite stars speaking out with Planned Parenthood to support President Obama and say Yes We Plan.

6. We took infographics to the next level

I was going to whip up a chart to show the declining interest in stale, boring infographics, but instead I’m gonna show you some infotastic supergraphics. Bam!

We helped The Humane Society of the United States build an interactive infographic where supporters can look up all the victories they’ve accomplished together and share why they care about animals. 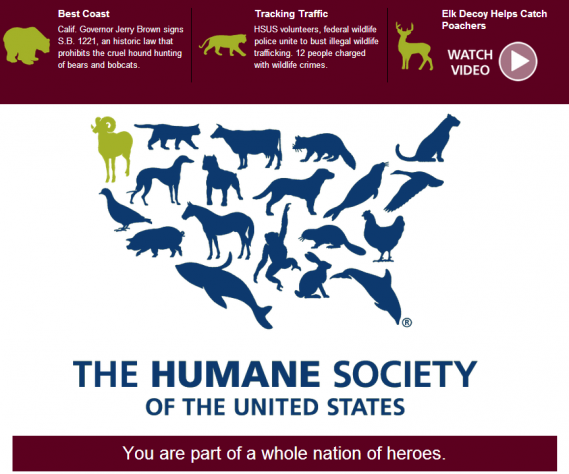 We built a tool where Union of Concerned Scientists supporters can calculate their own carbon footprint — and get a customized plan to reduce it by 20%! 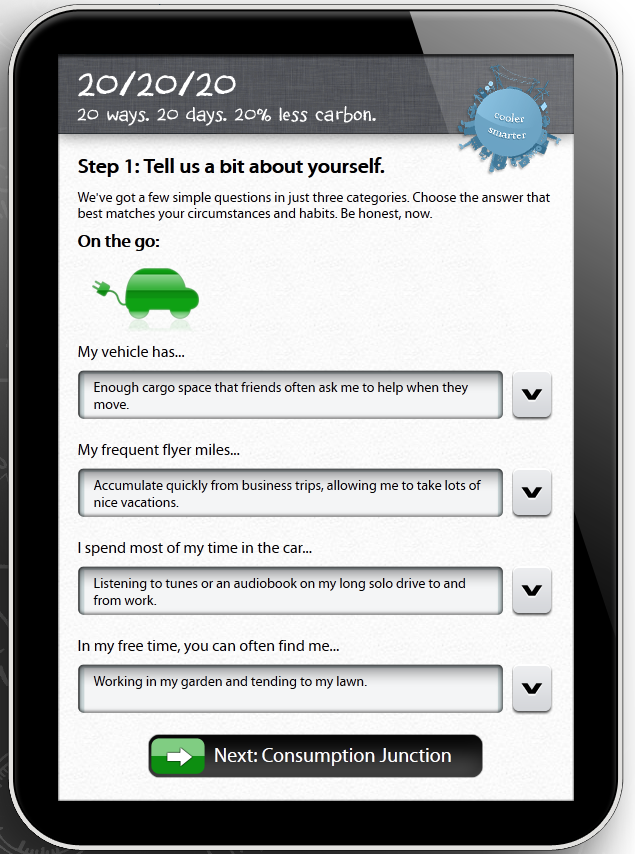 And we couldn’t resist making our 2012 eNonprofit Benchmarks infographic animated this year!

Nobody puts marriage equality in a corner
Worst. House. Ever.
Chick-fil-A’s fowl play
18,000 Jews Go to Washington
Give a tot a tat
Argh
The unambiguously anti-gay duo

8. We killed ‘em with cuteness

You know, it’s not like you can just put a few pictures of cute kittens in a fundraising appeal, sit back, and watch the donations roll in. Well, sometimes it’s like that. But if you want to make the most of the cuteness at your disposal, you’ve got to work for it.

Personally, I don’t much care for cute baby animals (including humans), but I am reliably informed that these are some of the most adorable fundraising and advocacy campaigns we worked on this year. And I know for sure they leveraged those big, soulful eyes for some big successes.

Thanks in part to The HSUS’s global Canadian seafood boycott, Russia made history by banning its trade in harp seal fur. We’re closer than ever to ending the senseless commercial seal hunt, and we’ll keep on fighting alongside The HSUS until every adorable seal pup is safe! 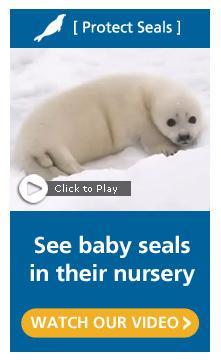 Or the kids at Children’s National Medical Center, who got a ton of Valentines this year thanks to our campaign — and helped CNMC grow its email list by 33%! 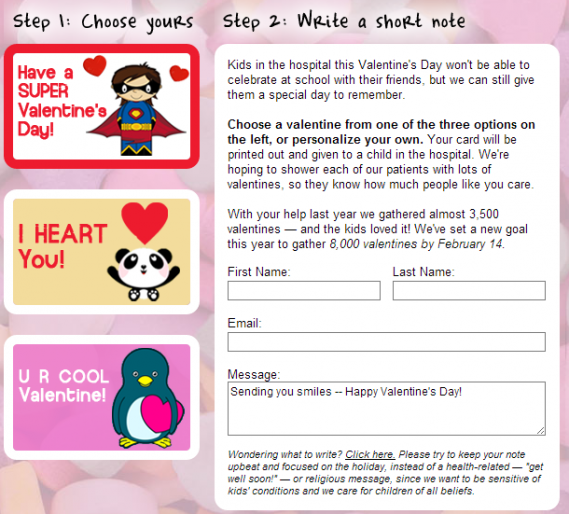 And check out Julius — how can you say no to this little guy? In a fundraising appeal for the Wildlife Conservation Society, we told potential donors how this baby orangutan was captured by illegal wildlife traders that killed his mother. But with the help of government officials and donors (like you!), little Julius is safe now and his captor in jail. 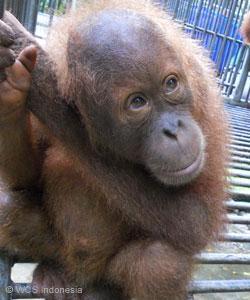 9. We let you “decide your destiny”

Our goal: Show how corporate interference in environmental policymaking is relevant to your daily life. Your goal: Try not to die! Relive your childhood and read the online Choose Your Own Adventure-style book we created for the Union of Concerned Scientists, and don’t miss the ambitiously cheesy cover: 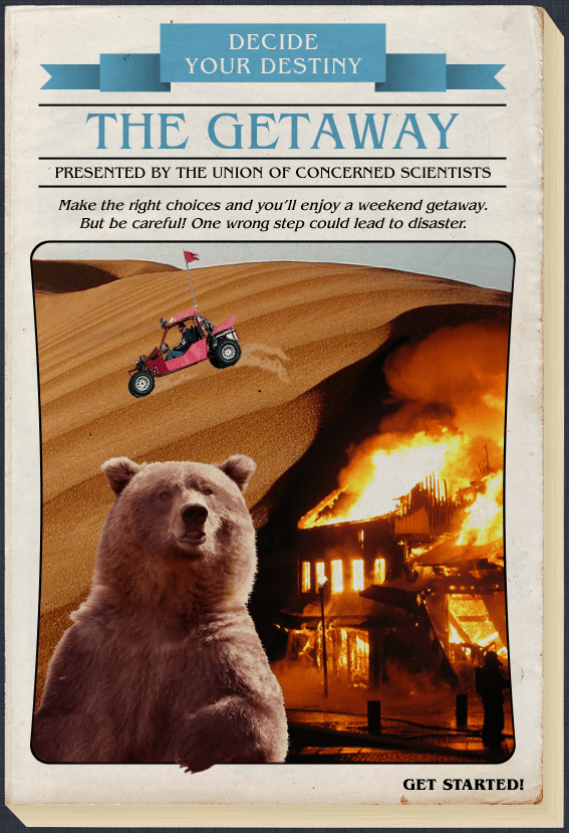 10. We finally met our match

We couldn’t have done all this awesome work for our clients if M+R and Watershed hadn’t teamed up and merged this past summer. We all got more passionate, kind, funny, quirky co-workers, and our clients got even more experience, creativity, and knowledge to help them keep changing the world. In case you want to relive the magic, watch Madeline and Sarah falling in love all over again: 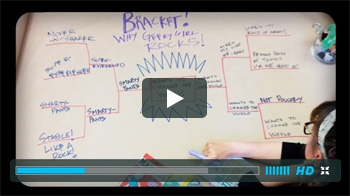