Where should you put your acquisition investment dollars?

Looking to build your donor file and wondering whether to invest more in online or offline acquisition?

We took a closer look at data from Target Analytics’ recent 2011 donorCentrics Internet and Multichannel Giving Benchmark Report and found some insights into this question. 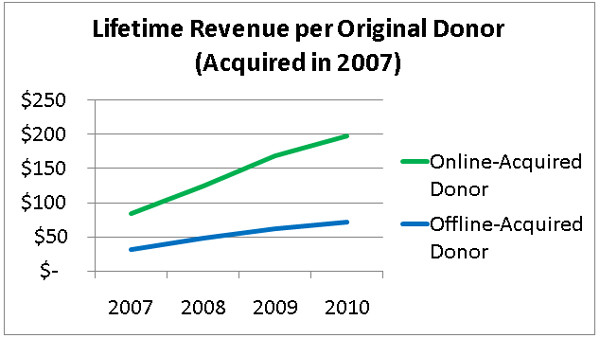 But not so fast!

A deeper look at the data reveals that rate of growth of first-year online and offline revenue is actually nearly identical. For example, the chart below shows that if we took $100 from an offline donor (or “a pool of offline donors”) in 2007 and $100 from an online donor (or “a pool of online donors”) in 2007, the total revenue would grow at about the same rate – to approximately $230 total by 2010. The difference between the charts is that the chart above looks at revenue growth at the donor level – and online donors have much higher initial gifts and their subsequent gifts are much larger, too. By contrast, the chart below normalizes on dollar basis so both online revenue and offline revenue starts at the same point. The rate of growth using that measure is about the same. In other words, if you made an investment to generate $100 of first-year online revenue, you’d probably gross the same amount of revenue three years out as you would by investing enough to generate $100 of first-year offline revenue. 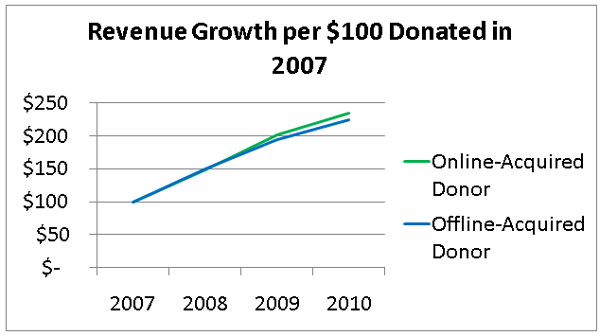 Truth is, when it comes to comparing online and offline acquisitions to see who’s paying off the most, there’s more to consider than the raw dollar amount of money raised per donor.

We recommend you also consider the following:

Getting the most out of your investment

At the end of the day, it’s not about picking one channel over another, but rather identifying the best individual sources to invest in, regardless of channel, and how to get the most out of your investment once it’s made. We recommend setting up, tracking and comparing ROI across channels and sources. And, of course, building an effective multichannel program will help you get the most out of your investment.