Winning the Midwest for SEIU

CHALLENGE: How can we mobilize infrequent Black and Latinx voters in Wisconsin and Michigan and defeat Donald Trump?

OUR APPROACH: We used the SEIU’s core issues—including the fight to raise the minimum wage—as a jumping-off point to connect with potential voters, layering in additional creative concepts constantly to reflect what we were hearing on the ground and our own internal research.

Getting there wasn’t easy. Our creative strategy had to continuously evolve to meet the challenges of 2020—from a crowded presidential landscape, to pivoting our entire organizing strategy after COVID-19 shut down in-person efforts, to communicating with voters about a long list of new deadlines and complicated rules around voting in the primaries and general.

To connect with potential voters, we knew our creative couldn’t look like just another political ad or text from a candidate. We chose fresh, modern designs to capture people’s attention mid-scroll. And we knew voters would tune us out if we parroted the same tired talking points people have heard for years. Instead, we used a combination of research, social listening, and feedback from voters and organizers to ground our message in what people were talking about, worrying about, and hoping for in communities across Michigan and Wisconsin.

Meeting the Moment in a Pandemic

Fight for $15 organizers had been working in Michigan and Wisconsin for years, organizing workers around raising the minimum wage.

We began our electoral work there, using Michigan and Wisconsin’s low minimum wages as a recruitment hook.

We don’t believe in “set it and forget it” messaging strategies—especially in a cycle as tumultuous as 2020. We relied on polling data and research from movement partners, social listening, feedback from the “field,” and our own creative performance to authentically connect with and motivate voters.

For most of the cycle, voters were more concerned about getting good-paying union jobs, staying safe from COVID-19, and fighting back against police violence and anti-Black racism—not thinking about voting, much less candidates. So we met people where they were, focusing on the issues and highlighting opportunities for people to rise up and create the change they needed in their communities. 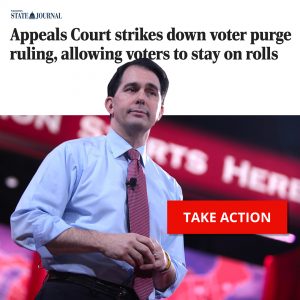 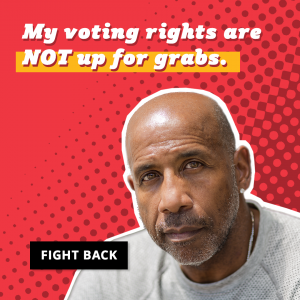 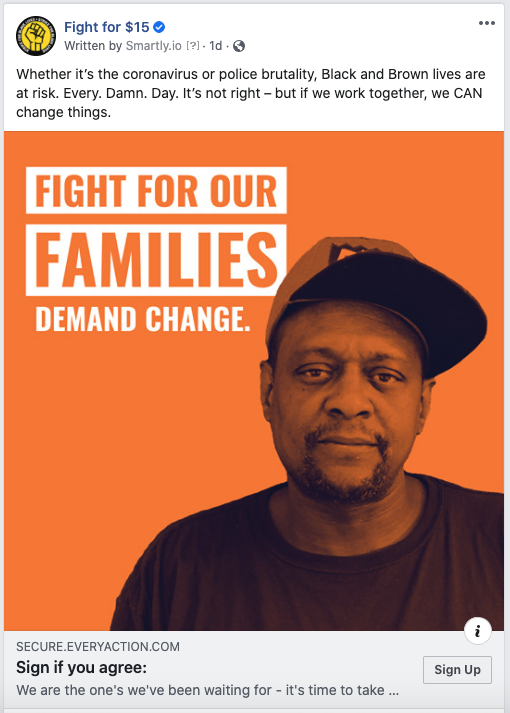 We knew many voters felt apathetic about politicians and skeptical that their vote could make an impact in the election. So in addition to recruiting people to the Fight for $15’s list, we also served people motivational content to remind them of the power of collective action.

The Wisconsin primary was our first “dress rehearsal” for the general election. We used the issues, creative themes, and optimization learnings from the first few months of our work to bridge the gap between issues people were activated on and candidates they may have been less familiar with, such as WI Supreme Court candidate Jill Karofsky (who won!). 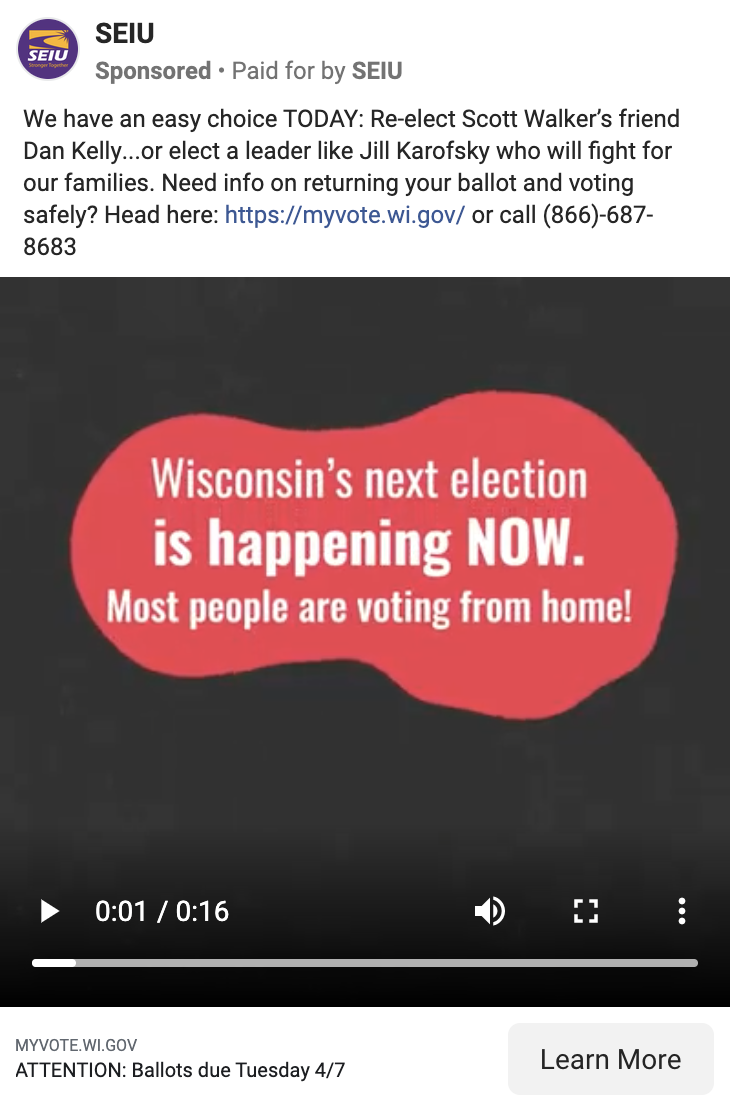 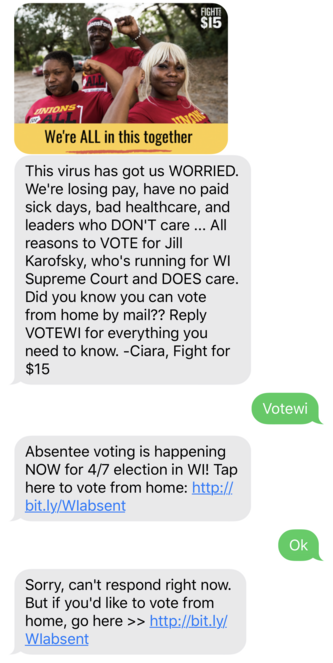 Michigan’s primary was an opportunity to build on the work from Wisconsin’s primary—including introducing more tactical social pressure ads, and experimenting with ways to educate voters on the different ways they could cast their ballot this year.

We used Swayable to run pre-market testing ahead of critical strategy pivots. Data from Swayable helped us understand how to effectively walk people through the mechanics of voting by mail or voting early in-person, and how to persuade skeptical Biden voters to be excited about the Biden-Harris ticket. 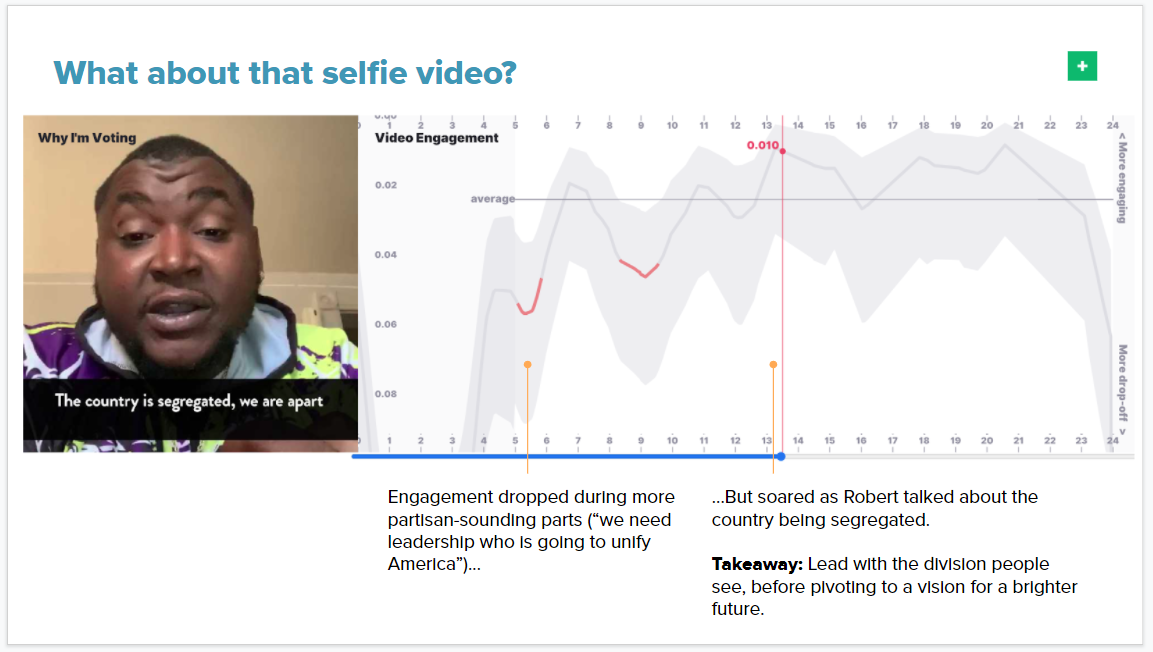 Swayable testing helped us understand the most effective ways to talk about Trump, as well as which audiences were most motivated to vote after hearing Trump attacks.

When Kenosha, WI police shot Jacob Blake, we paused existing content to give space for people to grieve—and act.

Building on the FF15’s work on the ground in Kenosha, we used digital to raise money for a GoFundMe for Jacob’s family, and we shared ways people could join the protest for Black lives in their communities. 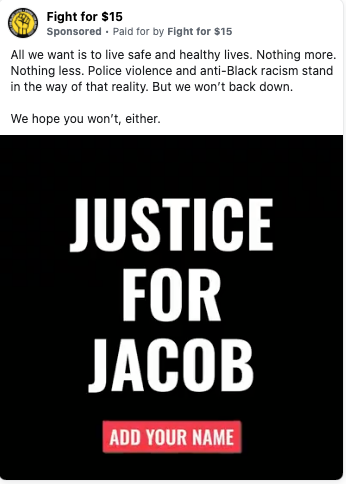 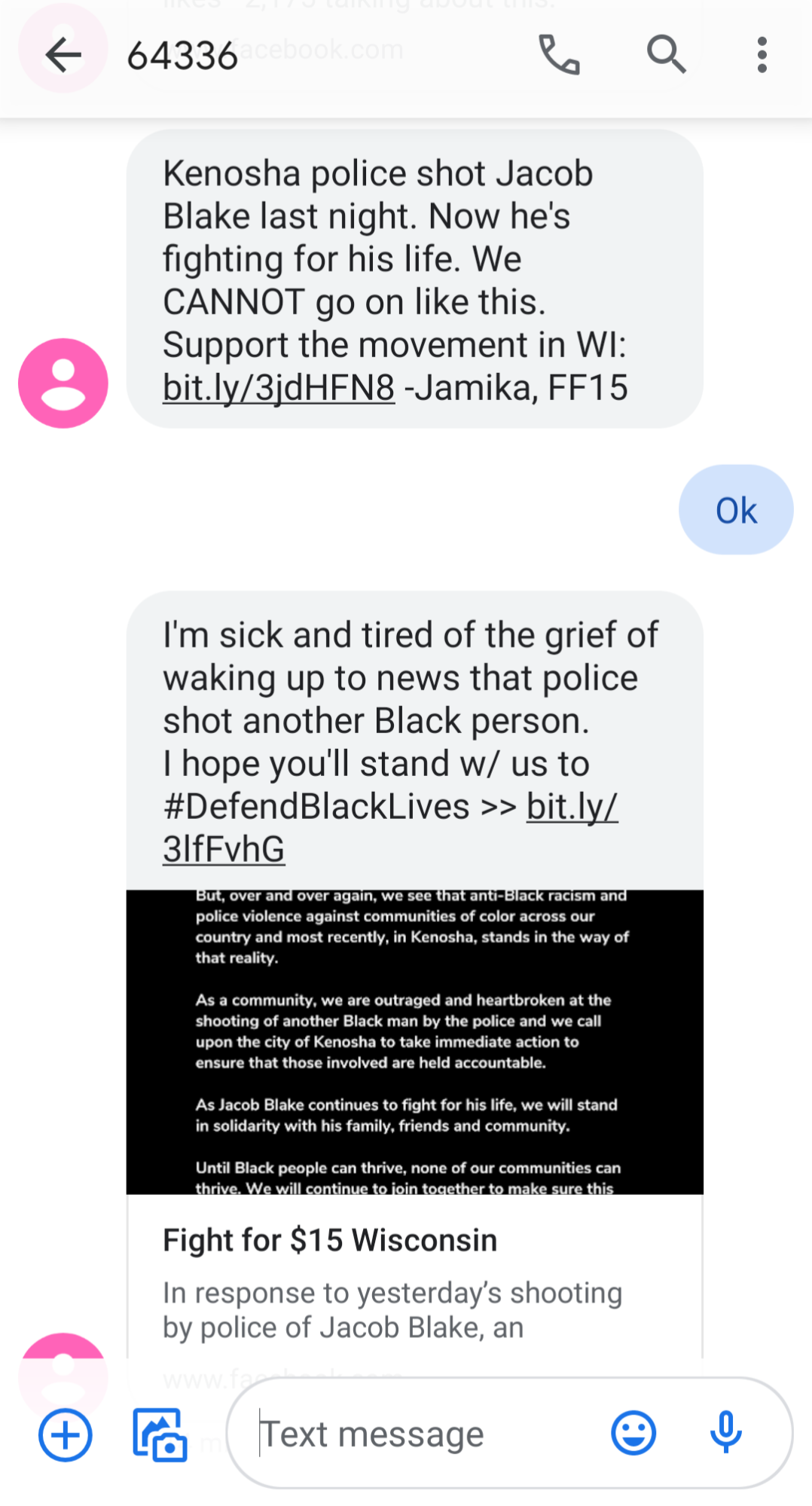 By the general, we were firing on all cylinders, leveraging the issues that resonated with voters during the recruitment phase to build the case for voting, using our learnings from Swayable testing and ads optimizations during the primaries to effectively walk people through how to vote, and utilizing a wide variety of creative styles to cut through the noise of early voting and GOTV and reach voters authentically. 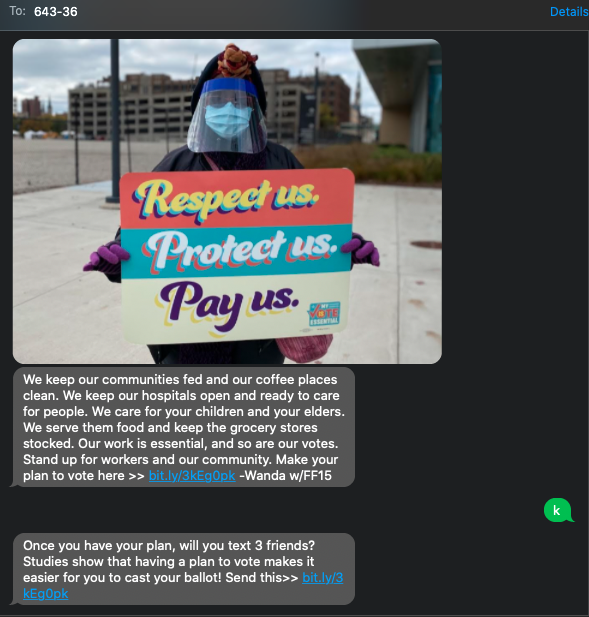 To counter disinformation and help people make a plan to vote safely, we directed potential voters to a Facebook Messenger bot flow.

We Weren’t Done Yet

Of course, the election didn’t end on November 3. On top of that, Facebook announced a blackout period for political content, closing off a valuable communications channel with voters.

We were ready despite those hurdles, prepping display, video, contextual, and SMS content designed to protect the results and reinforce the narrative that Biden won. 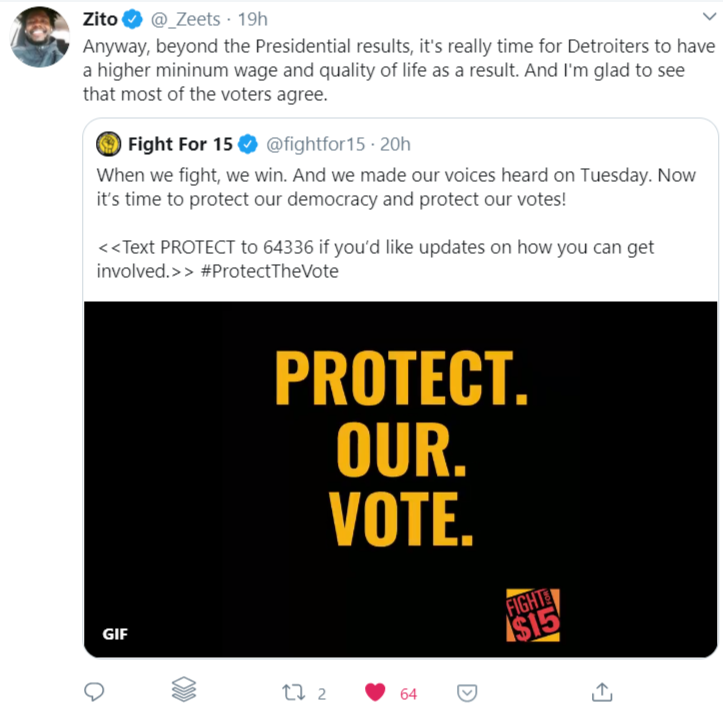 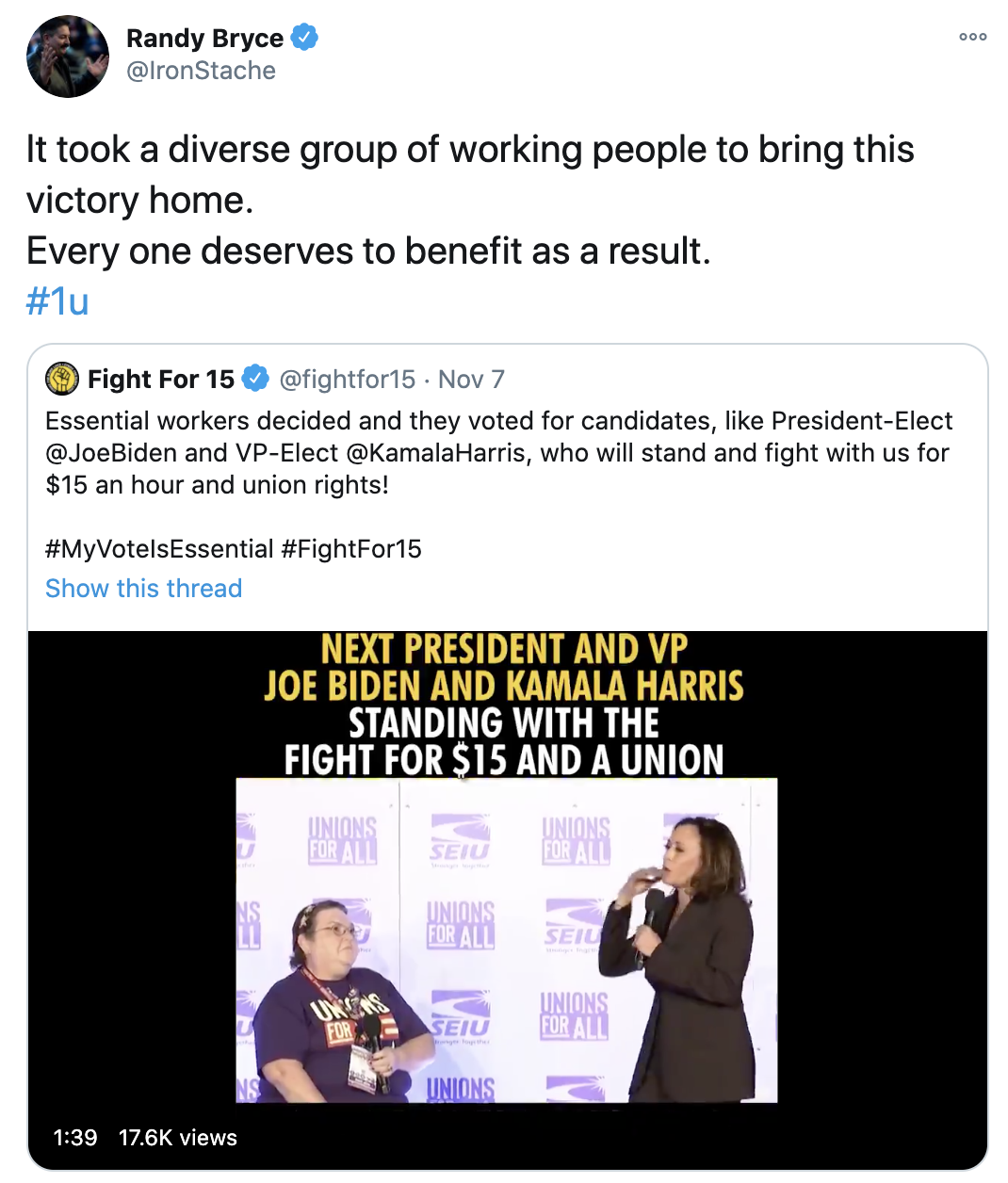 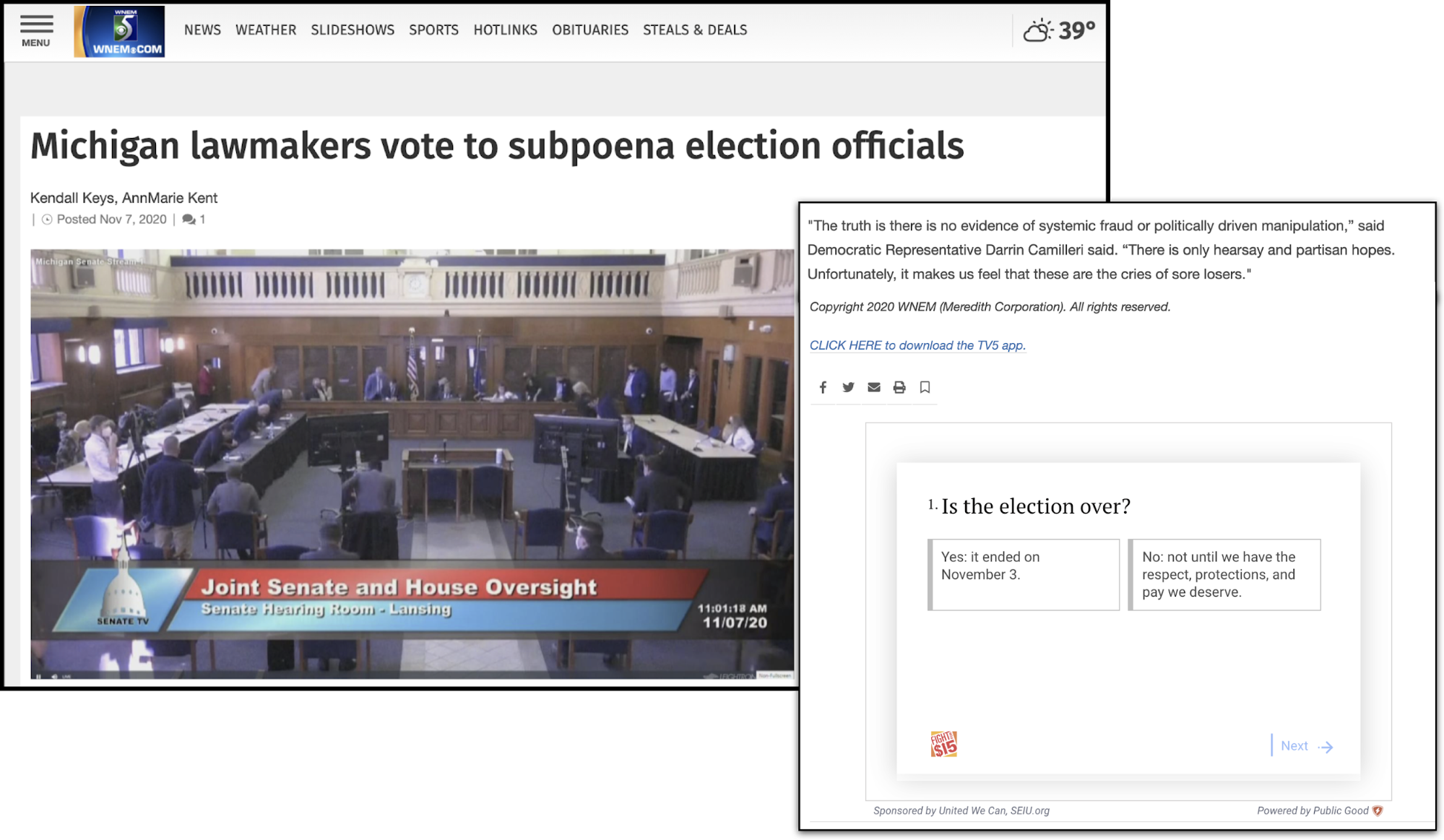 After over a year of organizing, we reached nearly 6 million voters in Michigan and Wisconsin with our content, generating nearly 339 million ad impressions and 45,000 SMS engagements. Those authentic connections with voters paid off: we won the White House and local races across Michigan and Wisconsin.