Every one of them has lent their name and their voice to some pretty awesome causes — and helped raise money for some of our favorite organizations.

But even A-list celebrities don’t guarantee A-list results for your fundraising campaign. To make the most of your moment in the limelight and create powerful celebrity messaging, you need to nail the details.

And it all comes down to this undeniable, irrefutable, indisputable fact: Stars — they’re just like us. And by “us” we mean people like your supporters — normal people, not people who work at non-profits.

Rich, famous, fabulous, whatever — the point is, the celebrity doesn’t work for your organization, she is outside of it. Her experience and perspective is in many ways closer to your donors’ than any internal signer’s would be. So she can say things your organization can’t say.

He can say, “Organization X is a bunch of goddamn heroes doing amazing work every single day — and if you support them then you are my hero, too.” Your CEO can’t get away with that sort of thing, because that would be weird and braggy and ugh. A celebrity can speak as a fan, as a supporter, as an outsider — and since we feel like we already know this person, that’s something we can connect to.

So she can speak as a regular ol’ fan/supporter/outsider but TEN TIMES COOLER because famous and/or beautiful and/or universally beloved. That’s why getting a celebrity voice right really matters.

Sometimes you get lucky, and you get a celebrity who rocks it right off the bat. Maybe he’s a writer, and it shows. Usually, though? No. Usually, you get a few paragraphs that read like a cross between a press release and a senior essay. Formal, impersonal, wordy, long, and…oh-so-earnest.

Well, duh. Most celebrities don’t actually write email for a living like you do because they’re too busy being an awesome rock star.

That’s where you (or, we!) come in. It’s usually an iterative process. She writes something. We edit something. She sees what we’re going for and make it even more like herself. It’s fun. No, really, it is! Here’s how we go about it:

Get to know your rock star. We don’t really get to meet the rock stars we’ve written for. But it feels like we have. I can tell you that Sarah Jessica Parker has three kids, lives in New York, spends a certain amount of time in Ireland, and loves animals. I know this from my research and from Wikipedia and (I have to read it, it’s my job) People magazine. Knowing their deets comes into play in subtle ways, like perspective, and obvious ways like mentioning her kids by name in the copy, for example.

SOUND like your rock star. Take an hour to scroll through your rock star’s Instagram, Facebook, and Twitter accounts. Chances are pretty good at least one of those is actually him and not just an assistant and you’ll get a sense of what’s going on in his head these days and how he speaks. (Just For Fun: Check out Miley Cyrus’s Instagram. Man, she’s trolling the entire internet and it’s kind of awesome.)

And also sound human. Good gawd, it’s hard to believe I have to say that but there you are. A robot might say: “This Tuesday is an important fundraising event called Giving Tuesday.” A human might say, “You know about Giving Tuesday, right? It’s so rad!” And rock stars are human. They are just like us.

Figure out WHY. Why is your rock star connected to the cause? An incident, a trip, something she read, WHAT. AND WHY. You need to know that. You need to grok that shit. And you need to be able to write a compelling sentence or two that encapsulates her connection.

Enough talk. Read the email appeals from Amy Poehler (for Planned Parenthood) and Samuel L. Jackson (for Oxfam America) below to see examples of celebrity signers getting it right (possibly with the help of a friendly neighborhood copywriting professional): 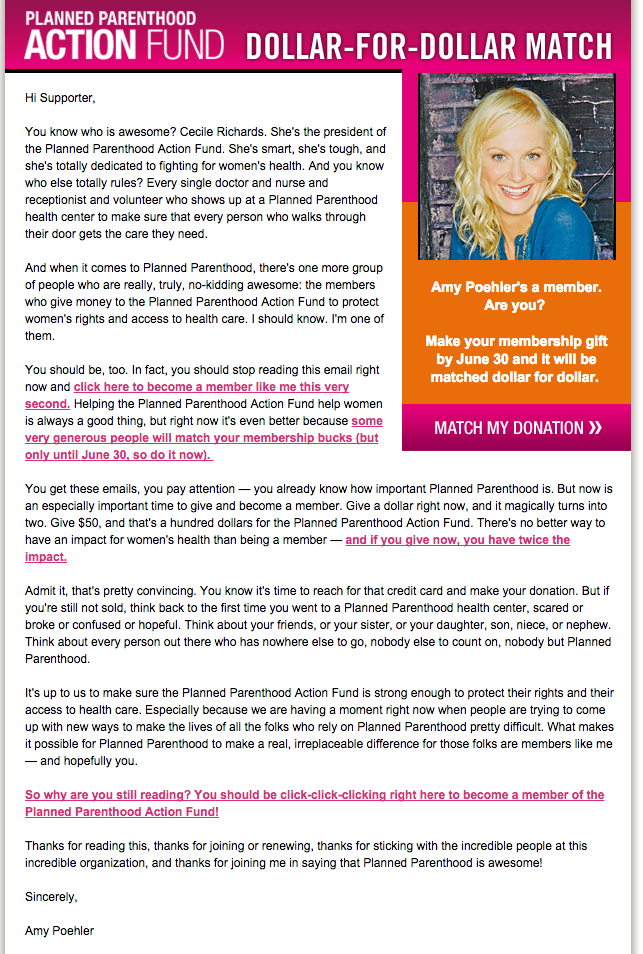 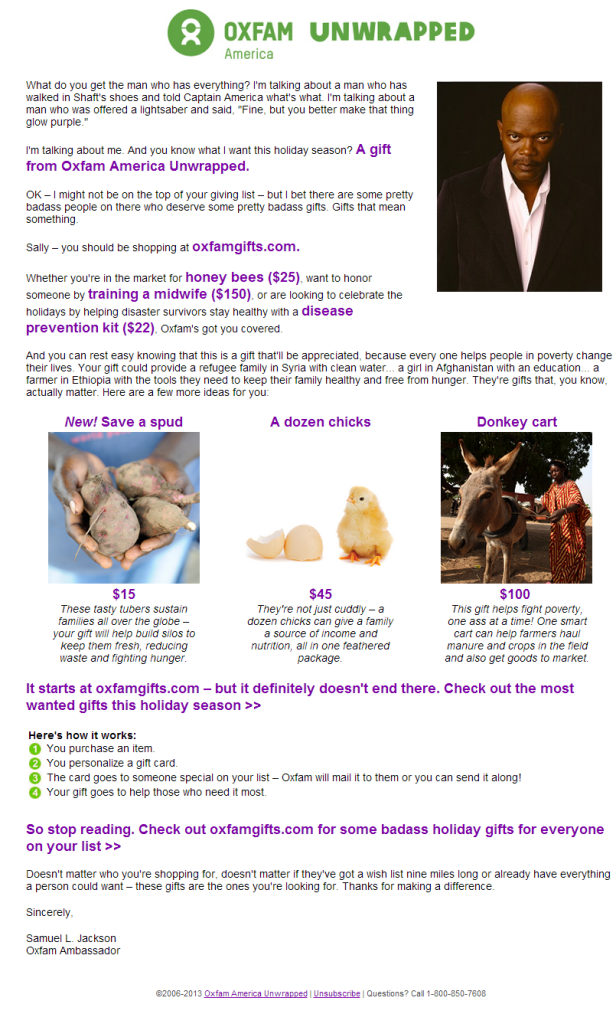