How the Media Covered Voting Rights in 2020

Elections are big news in any year. In 2020, the election—and just as important, the stories told about the election—took on exceptional significance.

First there were stories of the historic voter turnout, and people forced to line up for hours across the country to cast their vote. Then came the false cries of fraud and a refusal to accept the election results as legitimate.

Now we’re seeing many Republican-dominated state legislatures advance restrictive and often racist measures that take power away from people to cast their vote. Protecting our fundamental right to vote will only grow more urgent in the months ahead, particularly in advance of the 2022 midterms and 2024 presidential election.

That’s why our team is rounding out our 2021 Mediamarks Labs series by taking a close look at the trends in last year’s coverage of voting rights—specifically the battle to protect, expand and realize every American’s right to vote.

As always with this series, the hope is that communications professionals will keep the lessons of how coverage of the issue of voting rights shifted in 2020 in mind when charting a course for the future, especially as 2022 midterms fast approach.

From absurdly long voting lines, to the USPS removing mail collection boxes for mail-in ballots, voter suppression was rampant in 2020. Stories that honed in on a state’s efforts to block our freedom to vote had people paying attention, driving up engagement on social channels.

For example, Mother Jones’ investigative story on Kentucky’s drastic reduction of polling places in predominantly Black neighborhoods was shared widely on Facebook (320,000+ shares). Similarly, CNN’s story on USPS’ efforts to remove mail collection boxes in communities across the country was among the top 5 voting rights stories, when looking at the number of Facebook shares. 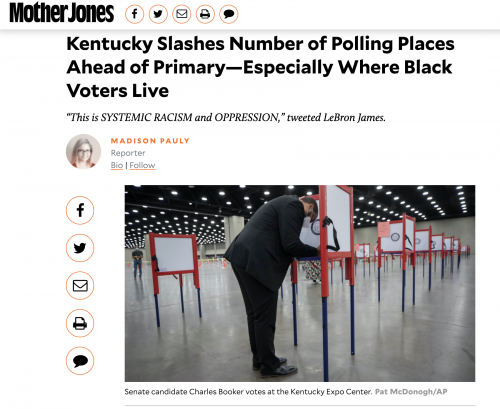 What’s more, of the top 20 national stories on voting rights shared on Facebook, more than a quarter were dedicated to looking at voter-related issues in our communities.

Voting rights issues affect the whole nation, but first and foremost, they start in our communities. These issues are as much a state issue as they are a federal issue. And it’s critically important to tell these stories. It helps us better understand complex words like “voter suppression” and see the real, harmful impacts of politicians and billionaires who work to actively block the freedom to vote for Black, Brown, Indigenous people and many other important communities who deserve equal access to the ballot box.

And together, amplifying the stories of voters and activists on the ground is crucial to understanding the bigger picture of voter suppression and the fight for voting rights nationwide.

Some of the most shared articles related to voting rights on social media platforms (such as Twitter and Facebook) featured public figures like Stacey Abrams, Mark Zuckerburg, and late U.S. Representative John Lewis, and celebrities like LeBron James.

While all of these figures played a different role in the realm of elections and voting, the historic actions they took earned them meaningful feature stories in media outlets in the lead up to and after the election.

A majority of the outlets we looked at, including ones like Rolling Stone and The Guardian, dedicated in-depth coverage to looking at the historic efforts of people like Lewis and Abrams, and what those efforts meant for today’s elections. These stories also made clear the long way we still have to go in ensuring all Americans have an equal say in who’s elected to make decisions about issues that impact our lives.

Celebrity activism in voting rights was at a high, and the media followed. More than a quarter of the top 20 stories shared on social media were a result of a high profile or celebrity voice speaking out on voting rights. Specifically, two of the top 20 articles with the most Facebook shares focused on LeBron James’ important efforts to advance the right to vote for people who are formerly incarcerated. 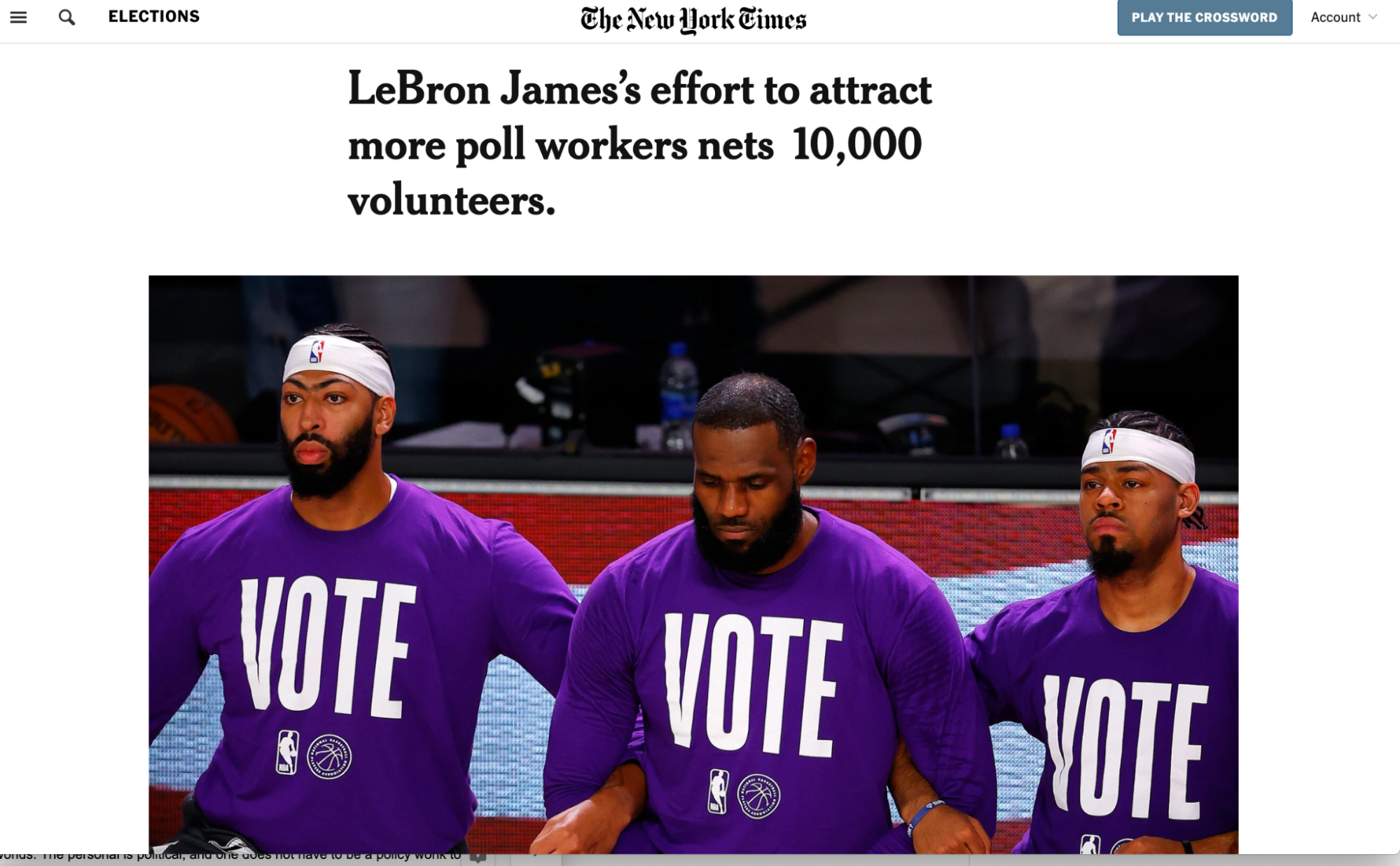 It’s no surprise audiences gravitate towards stories that feature a well-known figure. And whether it’s a celebrity or politician, readers tend to contextualize their understanding of a given issue through key influencers or voices that dominate such a field.

“Unexpected” big-name voices like LeBron James can help stoke that curiosity even more. In our minds, that’s a good thing. The more people following (and hopefully engaging with) an issue that impacts every aspect of our lives—from the quality of our schools and roads in our communities, to our access to healthcare and good jobs—only makes our democracy stronger.

Outlets like Vogue, Teen Vogue, and Vanity Fair were once considered lifestyle-only publications, catering to an audience that enjoyed light-hearted content. But in the last several years, we’ve continued to see a real shift and investment at lifestyle publications in looking at hard news that impacts our lives—from voting rights and immigrant rights to reproductive health. In 2020 alone, the lifestyle outlets we looked at in Mediamarks, which included just a small sampling of these outlets, dedicated a total of 114 articles to issues on voting rights.

Vogue’s feature story on Stacey Abrams’ leadership and advocacy to fight for equal access to the ballot box, which was among the top 20 articles shared on social media, was a perfect example of putting voting rights and political news front and center: 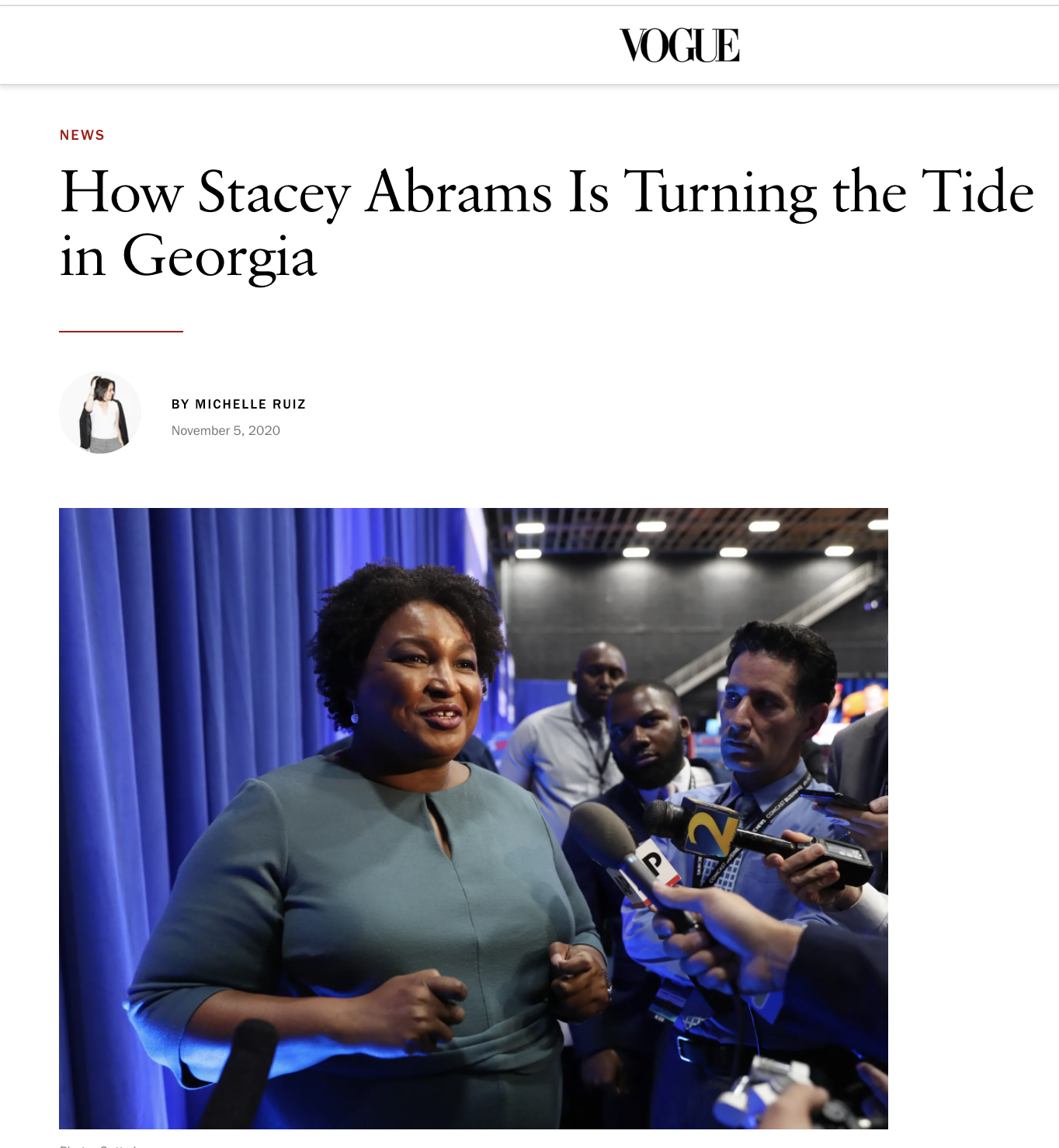 Audiences of lifestyle outlets are increasingly engaged in both the political and social worlds. The personal is political, and one does not have to be a policy wonk to engage with what’s happening in the world.

Looking ahead as nonprofits pitch these outlets in the future, honing in on how lifestyle, gender, and reproductive health impact voting rights will be crucial. Connecting the dots between the personal and political for readers will ensure they understand how voting rights are woven into all aspects of their lives—and will hopefully spur even more activism and engagement.

The media shined a light on under-reported communities

While it was disappointing to see unfounded claims of election fraud become a big part of the narrative around the 2020 election, a bright spot was the coverage dedicated to elevating often under-reported communities—from individuals who are formerly incarcerated, to tribal communities—and their intersection with key issues like voting rights. These stories often drew attention to the barriers that marginalized communities still face when it comes to accessing the ballot box.

In our work with the Declaration for American Democracy—a coalition of 240+ organizations who have all come together to fight for the freedom to vote—we saw firsthand the attention reporters were paying to lifting up the voices of under-reported communities. It helped contribute to the urgency around needed state-level reforms to ensure all people could easily and safely vote during a pandemic, and around legislation like the now-called Freedom to Vote Act, which would transform our democracy into one that is truly of, by, and for the people.

National outlets such as Teen Vogue, The New Republic and TIME not only dedicated meaningful coverage to Native communities and the unique challenges they face when it comes to voting rights, but also highlighted the important role they play in critical elections across the country. 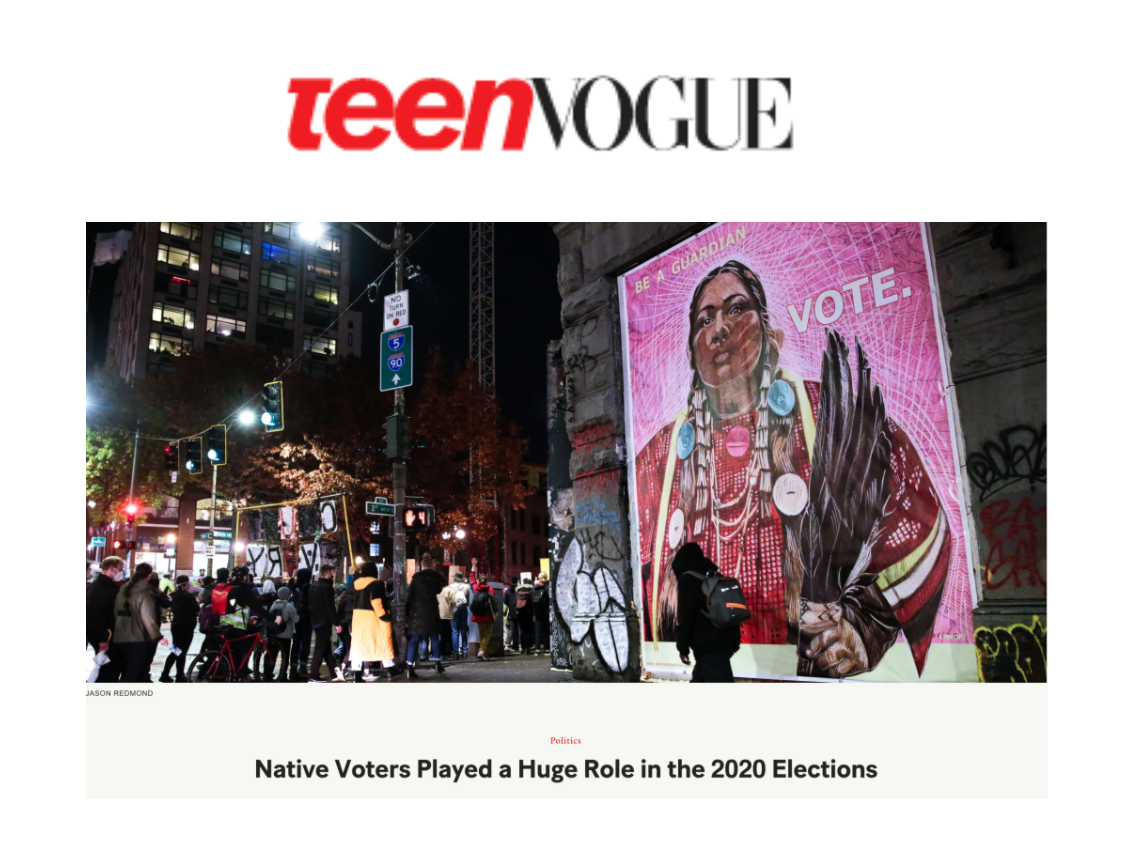 We saw similar trends of robust national and local coverage of individuals who are formerly incarcerated, particularly in the Florida fight to restore critical voting rights to people with felonies.

While in the past these have been treated like niche issues, they have far-reaching implications for many important communities and elections. Broadening their coverage is incredibly important in order to make meaningful change.

Unfortunately, there’s still a long way to go in elevating these communities even further as well as the language the media uses when talking about marginalized communities. With continued education with reporters, the hope is that there can be a stronger shift towards person-first language, moving away from words like “felons,” which can be dehumanizing, and instead towards language like “people who are formerly incarcerated” that center and respect people and protect their dignity. (Here’s a resource we find particularly helpful, from our friends at the Vera Institute of Justice.)

As the midterms fast approach, we have the opportunity to build on the 2020 coverage that honed in on the challenges many Americans still face to exercising our voting rights, but also celebrated great wins like historic voter turnout and lifted up more voices of Black, Brown, and Native voters, among other marginalized communities. The hope is that we only go up from here, and the voices and stories we put in front of the media to lift up will continue to contribute as we work towards a democracy that gives an equal voice to all of us. Onward!

*A quick word about methodology: We use Muck Rack for a lot of our work at M+R, and that includes Mediamarks. The data in this post is based on a comprehensive Muck Rack search to pull media hit data aligned with our search terms from January 1, 2020 to December 31, 2020.

When Michelle isn’t driving communications strategies to secure press for nonprofits, you can find her touring the wineries and breweries of Virginia. Michelle can be reached at mblundell@mrss.com.

Aki Camargo is a former media strategist-turned journalist. With a background in PR and marketing, he is currently sharpening his audio and visual storytelling skills in graduate school. When he’s not working, Aki is likely listening to longform podcasts, or tending to his growing plant collection.