The simplest thing to do is just sit back and wait for money to appear.

Facebook Fundraisers is a powerful peer-to-peer fundraising tool, and since anyone can easily set up a page and ask their friends and family to chip in to a cause, nonprofits can see a quick uptick in donations totally separate from their own marketing efforts. The tool is becoming more and more popular, and having a big impact for organizations. On Giving Tuesday alone, Facebook reports that people gave $125 million to nonprofits through the platform—an almost 3x increase over the year prior.

But we can do a lot better than just crossing our fingers and hoping someone sets up a fundraiser for us. This year-end giving season, we saw an explosion in nonprofits crafting specific strategies to take advantage of Fundraisers—and some of those tactics are paying off in a big way.

If you’re still dipping your toes in the Facebook Fundraisers waters, you can learn more about the promise and the challenges in our previous post “Facebook Fundraising FTW”.

And if you’ve got the basics figured out, let’s dig in a little deeper to find out what worked and what was a good “learning experience” in 2018. We took a look at results across many of our clients and are happy to share some of the biggest trends of the year.

Starting a fundraiser for your org

Many groups took this simple approach at the very least. Even though they aren’t likely to get donor email addresses and be able to match them back to the database, organizations embraced the tool as an easy way for their supporters to give. For groups that don’t have easy access to great big pots of matching gift funds, this allowed them to promote a match on Giving Tuesday.

The payouts were respectable, but not huge game changers. Some groups raised over $10k through Facebook, and that can do a lot of good in this world! When we looked at the amount raised through Giving Tuesday Facebook fundraisers as a percentage of the total raised online on Giving Tuesday for 11 organizations, most ranged from 1-5%. The orgs that saw more than that were the groups that were already raising less on Giving Tuesday, so it was easier to see a bigger lift.

We really loved the groups that went the extra mile to thank all of their donors publicly. Like the American Museum of Natural History, who responded to every single donor’s gift with a fun gif—many of which starred a T. rex (very on-brand)!

Asking your supporters to set up fundraisers

This year, a few groups tried asking their email list or some subset thereof to set up fundraisers going into the year-end season. For the most part, results were not impressive. At best, a handful of people set up fundraisers bringing in a few hundred dollars each.

Given what we saw this season, we don’t think most groups will find it worthwhile to ask supporters to set up fundraisers around a campaign. Peer-to-peer fundraising is very personal, and the inspiration has to come from the heart. Instead, focus on getting them to give to your org directly during key campaign moments. A better time to ask them to start a fundraiser is when they might be thinking about something personal to them.

We did see one group have a lot of success asking people to raise money for them—Jobs With Justice. In fact, 44% of their Giving Tuesday revenue came from people setting up Fundraisers on Facebook! The secret to their success? They asked staff, rather than supporters, to set up the fundraisers.

And before you ask: yes, it was completely optional. The folks who opted to participate felt really good about it, too. Not only did they get friends and family to chip in for a cause they believe in, but they also had a great reply-all email thread filled with fun memes to fuel the competition. No lie, it all came to a culmination with this one: 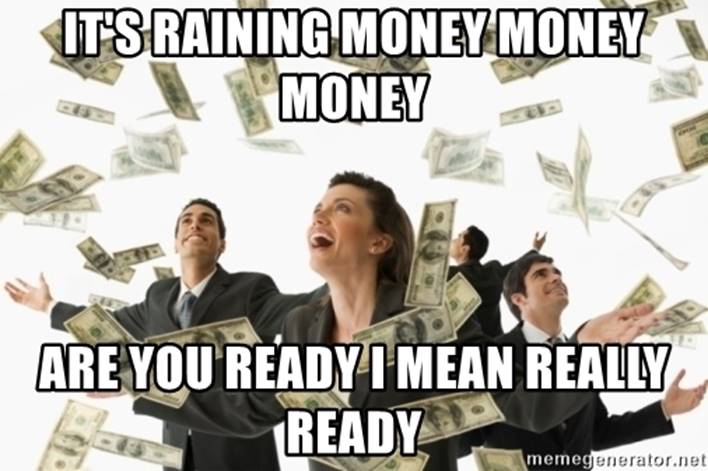 …not asking your supporters

The larger name-brand groups saw lots of people setting up fundraisers for them during this year-end season, even if they didn’t ask. This makes sense. After all, these organizations have worked hard to be a household name. So when people hear about Giving Tuesday as a day for charitable efforts—or if Facebook is nudging them to set up a fundraiser—it’s no wonder they think of these organizations.

If you want to be one of those go-to organizations in the future, keep working on finding your people and developing good relationships with them. This isn’t done overnight. Importantly, building your brand also means listening to your audience and maintaining a strong, authentic social media presence.

Where the real ca$h is

For a final, interesting case study, we point you to Feeding America. They had a successful Giving Tuesday Fundraiser, raising over $14k from their fans. Not too shabby! But one Fundraiser set up on their behalf raised 10x as much! That’s because it was created by none other than celebrity spokesperson and life coach, Tony Robbins.

This is a reminder that your social media strategy shouldn’t be limited to your org’s own social media profiles. Harnessing your influencers is the key to making social media work for you. And if you have celebrity supporters, definitely ask them to set up a Facebook Fundraiser on your behalf!

Cheers to more fundraising in 2019! Spot any other trends from 2018’s year-end season? Let us know @mrcampaigns!