Slowly but surely, most of us are accepting reality: Election Day will likely be the start of a long and tumultuous fight over who won—and even if he loses, Trump may refuse to leave office.

Trump has made it clear that he’ll likely use every single tool he can to lie and cheat his way into another four years. If he’s successful, this imminent threat to our democracy will be a decisive factor in the future of our planet. No pressure…but it’s a reality we all must reckon with, even those of us who work at “apolitical” organizations.

Ready to plan for how you’ll respond? Whatever your sector, we’ve got some tools to help.

STEP 1. RSVP for an M+R Roundtable on 9/30 to learn how nonprofits can plan for a contested election 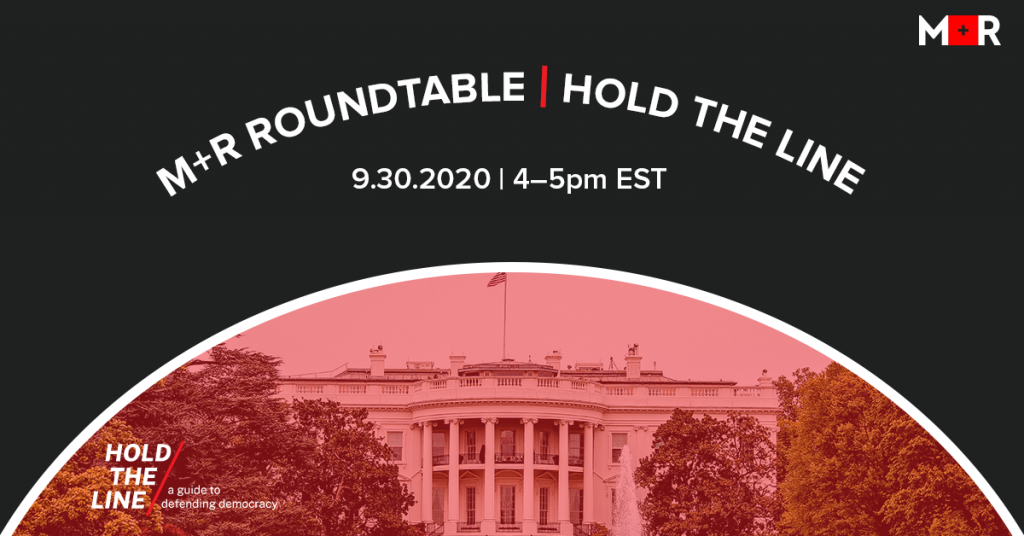 From 4–5pm ET on September 30, join nonprofit leaders and campaign staff to hear from movement experts including the authors of the Hold the Line guide—see below.

We’ll discuss broad possible scenarios that might result from a contested election with an eye toward how nonprofits can respond. We’ll also share some additional useful tools to drive scenario planning in your organization.

Once you’ve registered, it’s time to…

STEP 2: Check out Hold the Line: A Guide to Defending Democracy.

This new resource offers a detailed roadmap for three potential scenarios we might face during and after the election. It grounds this moment in vital research on how nonviolent mass action has worked in other countries to combat authoritarian regimes and win—and how it can work here. (M+R staffers helped put this guide together as part of an interracial, intergenerational group with experience in activism, organizing, and global pro-democracy movements.)

The guide is written for anyone, but it’s a useful tool for nonprofits to think through tactics and organizing asks in the following scenarios:

The guide lays out much more detail for these scenarios and how they might play out—from states sending competing electoral college votes to Congress, to Trump deploying military forces domestically under the guise of maintaining “law and order.”

It’s enough to make anyone break out an Olivia-Pope-sized glass of merlot (or sparkling water).

But here’s one thing we know from a mountain of research on movements in other countries and in the US: nonviolent resistance works. When autocrats have disputed election results and refused to leave office, mass nonviolent action from people across economic and social backgrounds has consistently caused authoritarian takeovers to fail.

If this is our only way to save our democracy (and it very well might be), nonprofit leaders have a big role to play. Nonprofits are conduits for ordinary people to change the world and alleviate suffering. People listen to us, give money to us, and in the massive effort that WILL be needed to protect our democracy, nonprofits must not only show up but LEAD.

We will need people in the streets from all political persuasions. We will need to create a hugely visible effort that provides political cover for election officials, county clerks, judges, legislators, governors, attorneys general, and the media to stand for what’s right, even if there’s enormous pressure to cave in the face of Republicans’ institutional power.

Brands can echo social movements, but they’re not going to lead us out of this mess. When trusted nonprofits talk, people listen. We need to be ready to show the way.

STEP 3: Start the conversation at your organization NOW

Here’s a sample agenda for your next meeting:

• Take a deep breath. Acknowledge that this is scary for many of us. But collectively, history has shown that we have power to prevent a bad outcome.
• Walk through the scenarios in Part II of the Guide.
• For each scenario, discuss how this organization might be willing to support mass coordinated nonviolent action.

○ What will our donors, activists, and supporters be looking for from us in this scenario? If this is the only issue getting any media airtime in our country for multiple weeks, how might that change our priorities and our communications?
○ What tools do we have at our disposal to support an organic nonviolent pro-democracy movement that emerges?
○ How might a scenario where fundamental democratic norms are subverted change our organizational “comfort zone?”
○ How can we prepare organizational leadership, board members, etc, for this situation and what might be required of us?
○ How do we ensure we’re putting the needs and safety of the most vulnerable populations first when considering our actions?

• How will a contested election impact various organizational priorities this fall, including:

Thanks for having the tough conversations. It really matters that we do this. If nonprofits show up late to this party, it could have catastrophic results for our democracy.

If, on the other hand, we have the courage to lead…this could be our shining moment.