Many advocates are feeling hopeful that we can make substantial progress with a new Congress and presidential administration. But the reality is that change is hard, Congress is still sharply divided, and none of that is changing any time soon. So when we score a victory that truly impacts people’s lives—especially when it’s a big, bipartisan win—it’s worth taking a close look at how it happened and learning all we can to support the next campaign.

In the waning days of 2020, and after four years of intense work with the Vera Institute of Justice, the U.S. Congress decisively moved to lift the ban on Pell Grants for people in prison—regardless of their conviction.

Lifting the ban means that incarcerated students and their families will have a chance to benefit from access to life-changing education, strengthening the communities to which they return home, and breaking the relentless cycle of recidivism. It’s estimated that more than 450,000 students may be eligible to enroll in college in prison programs with the support of Pell Grants now that the ban is lifted.

We’ll be talking more about this victory in the weeks and months ahead: from what it means for the incarcerated students and families poised to gain the most from Pell restoration, to what lessons can be drawn for future campaign efforts. But we also wanted to quickly share a few high-level takeaways from this effort, particularly as advocates and organizations prepare new campaigns relevant to the Biden Administration and the 117th Congress:

Clearly define the problem and the solution

Too often, issue campaigns skip over answering the “why” question. Why was it important to lift the ban on Pell Grants? The Vera-led campaign never stopped making the case that lifting the ban on Pell would reduce recidivism, improve safety within prisons, strengthen communities, save taxpayers money, and represent progress in the ongoing efforts to build a more just and equitable justice system.

The issue of Pell Grants for incarcerated people was never defined as a Democrat or Republican cause. State legislators in red states like Tennessee and blue states like New Jersey invested in policies that allowed us to build momentum and demonstrate to leaders in Congress the bipartisan sensibility behind Pell reinstatement. Standalone legislation to lift the ban in the U.S. Senate attracted nearly equal numbers of Democratic and Republican co-sponsors.

Mobilize allies where you need them

Vera was proud to partner with College and Community Fellowship, Drug Policy Alliance, Prison Fellowship, the Unlock Higher Ed coalition, and many others on the campaign to lift the Pell ban. We also engaged business leaders, governors, district attorneys, college presidents, corrections officials, and formerly incarcerated college graduates to connect with the right members of Congress, who ranged from committee and subcommittee chairs to other lawmakers who could help move our issue.

From in-person meetings on the Hill and Zoom calls, to letters and behind-the-scenes phone calls, to newspaper op-eds and social media influencer engagement, we ensured the members whose support we most needed heard from the right people at the exact right times.

Effective lobbying on Capitol Hill guided our decisions about targets, messages, and timing. Direct advocacy informed our choices of which members of Congress needed “back home” attention. Our social and earned media strategies meant that the right audiences were hearing the right messages. 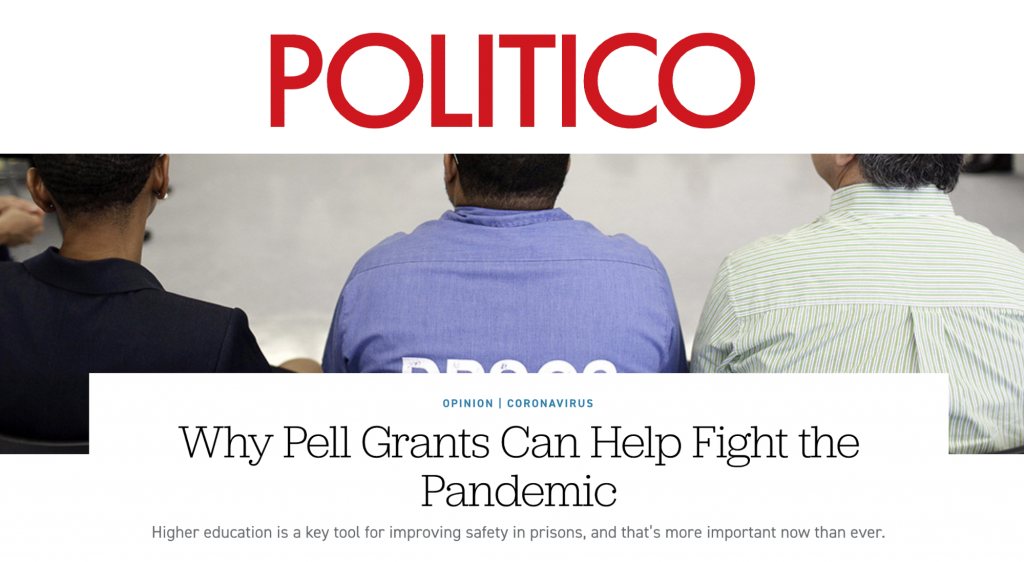 Identify and focus on your champions
It’s difficult to advance your issue in Congress without a champion (or, ideally, champions) in each chamber. We cultivated these champion relationships in both the House and the Senate through the grassroots and media strategies described above, and it paid off.

Representatives Bobby Scott (D-VA) and Rosa DeLauro (D-CT) in the House led efforts to include language to lift the Pell ban in a Higher Education Reauthorization bill and the Labor Health and Human Services Appropriations bill. While neither bill became law, they gave Rep. Scott leverage to insist that Pell reinstatement be included in the higher education portion of the end-of-year spending bill.

Senate champions included Senators Lamar Alexander (R-TN) and Patty Murray (D-WA), who served as chair and ranking members of the Senate Education and Labor Committee, respectively. Bipartisan sponsors of the House and Senate REAL Act made it easier to convince leadership of the broad support for lifting the ban.

The high-profile and consistent support of our champions meant that reversal of the Pell ban was included in the 2020 end-of-year spending package.

We’ll be talking about this campaign victory in more depth next month during an M+R Roundtable discussion—watch your inboxes for more details, and be sure to join!

When Bill Wasserman is not designing or running advocacy campaigns you can find him hiking the trails along the Potomac near Great Falls with his dog Sadie or firing up his backyard smoker, he specializes in low and slow cook’n.