Special guest Lab writer Matthew Kohut is the co-author of Compelling People and the managing partner of KNP Communications. Christine and Anna think about and run social media efforts for rad causes at M+R.

You are constantly judging everyone. Everyone.

Think about watching a stump speech from Hillary, Bernie, or Trump. Or a TED Talk you can’t get out of your mind (the brain scientist who has the stroke). Or Terry Gross interviewing just about anyone, ever, in that low-key, probing style of hers.

Replay those moments in your mind. As you watched or listened, you decided how you felt about the person talking. You formed a character judgment. Or rather, you actually formed two judgments, because when you interact with someone new you read them on two levels: strength and warmth.

Strength is the ability to get things done. Strong people shape the world through a combination of skill and will. They command respect because they are capable and credible. Like say, the Dept. of Justice:

If strength is about capability, warmth is about intentions. Warmth is what we feel when we recognize that someone shares our interests, concerns, values, or emotions. When people project warmth, we relate to them, like them, and want to be with them. Exhibit A, Mindy Kaling (also, can we get an invite??):

Striking a balance between strength and warmth is not easy because there’s an underlying tension between these qualities. The behaviors that project strength—flexing your biceps, using fancy words, barking orders—can also make you seem like a jerk. Conversely, the behaviors that project warmth—smiling all the time, deferring to others, or doing lots of favors—can make you look like a pushover or a lovable loser.

The late Steve Jobs projected more strength than warmth, particularly if you worked for him (or so we hear). Oprah Winfrey made warmth her personal brand, but her strength is evident both in her sense of moral clarity (just ask author James Frey) and her success as a #girlboss. And Elizabeth Warren is winning the strength-warmth balancing act on political Twitter these days:

The strength-and-warmth lens is a powerful tool for understanding why we respond to people the way we do. We also make strength and warmth judgments about brands. What comes to mind when you think about Apple? What about Exxon? BP? Koch Industries?

Okay—get your heart rate back down. As a nonprofit, you’re subject to the same kinds of judgments about your brand. And right now, there’s one place where most of those judgments are being cast: social media.

It won’t surprise you to hear that nonprofit social followings are on the rise. While email lists grew by 14% between 2014 to 2015, nonprofits saw their Facebook fans go up by 29% and Twitter followers go up by 25%. If you want to be heard, admired, trusted and supported by the growing number of people who follow you on social media, you’ve got to think about the balance of strength and warmth you’re putting out there through your content mix and your voice on social channels.

Step Up Your Strength

Think about the accounts you follow personally. Who has 750K followers? That’s a measure of strength, particularly when you consider how a social media post travels beyond its audience of followers. (The 2016 M+R Benchmarks Study found that half of the people who view a nonprofit’s Facebook post aren’t even fans).

But follower counts are far from the only way of communicating strength on social media. When the language of a post is direct, factual, and forceful, the message itself can project strength.

Strength by Expertise – This post from the American Cancer Society uses the expert voice of one of the organization’s researchers to talk about their research in a simple and compelling way: 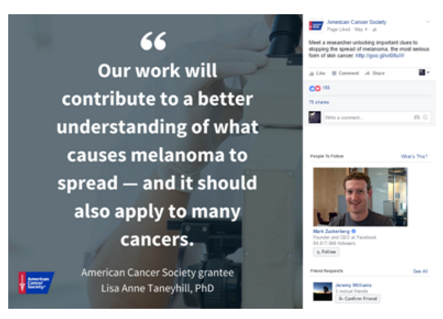 Strength by Success – Whether it’s a post announcing that you blew through your fundraising goal or celebrating your recent policy win — people respect success. Take this Population Connection Action Fund post announcing the organization’s successful work to get Democratic presidential candidates on the record about the Helms amendment: 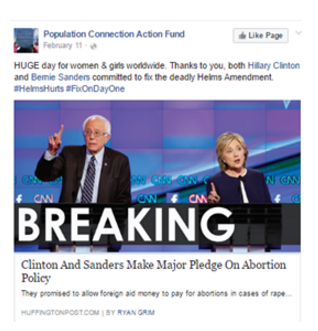 Strength by Relevance – Your organization is in the news, trending, relevant. That’s a strong place to be. Consider this post from Planned Parenthood of New York City linking to a recent feature in The New York Times: 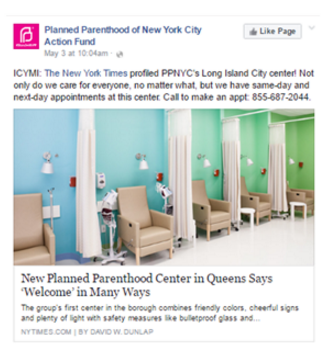 Strength by Bold, Clear Statements – That direct, factual, and forceful language we mentioned? Here it is in action, in another sample from Planned Parenthood of New York City:

Look past the numbers and credibility, and embrace engagement and shared concerns or interests. How much communication flows in multiple directions on your posts? Do your tweets and posts get personal replies that prompt lively multi-party conversations?

Warmth by Engagement Rate – This American Cancer Society Relay For Life post riffing on “May the Fourth be with you” got more than 8,000 reactions and 5,500 shares: 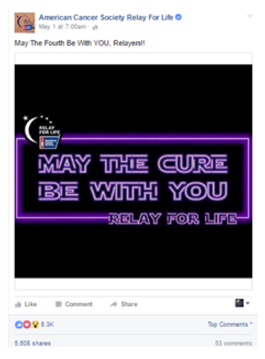 Warmth by Being Human – This is BIG. HUGE. You can’t communicate warmth on your feed if you’re not being a relatable, recognizable human. Take the Denny’s Twitter feed. (Seriously!) Whoever runs this feed is so beautifully, hilariously real, you can’t help but feel the human touch and personality that goes into their content every day.

After all, warmth is really about shared concerns, interests and emotions, which are exactly what these next posts strive to project: A post that uses a compelling human voice (Project Open Hand); a post that uses a handwritten note (American Cancer Society Making Strides); and a post that uses an emotional value statement (Feeding America): 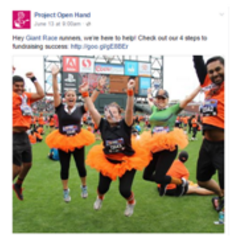 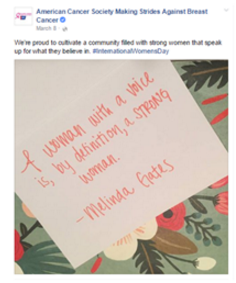 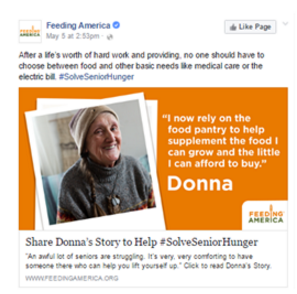 Warmth by Saying: We’re on the Same Team – There are myriad ways your posts can achieve an inclusive frame: by featuring images of people that your followers will relate to; by writing posts for the non-English speakers in your community; and by placing your supporters front and center in your work – like this post from the Wildlife Conservation Society’s 96 Elephants campaign, which achieves that “same team” mentality with the simple use of the word “we”: 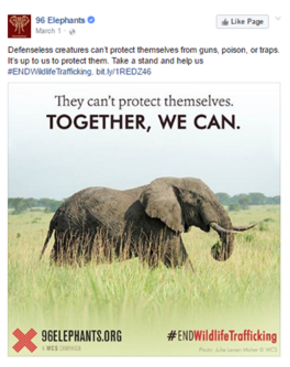 You can also show users you’re on the same team by featuring their content in your feeds: 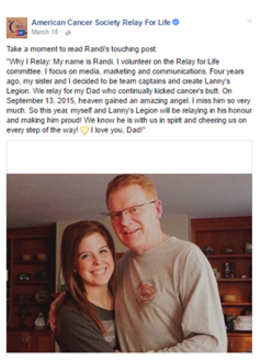 Finally: Speak their language! Use popular hashtags that supporters likely use themselves to join existing conversations like #motivationmonday or #squadgoals: 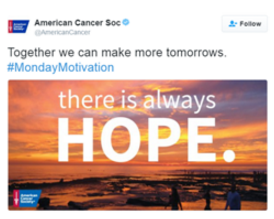 Warmth by Shared Values – Some posts are designed to remind people what your organization or campaign is all about. Take this sample from the Fight for $15 campaign: 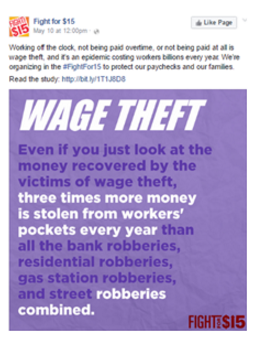 Of course, some posts nail it, and strike just the right balance between strength and warmth: Take this post from the American Cancer Society’s Strides Against Breast Cancer community that shares factual information in a way that is both straightforward and comforting/inspiring: 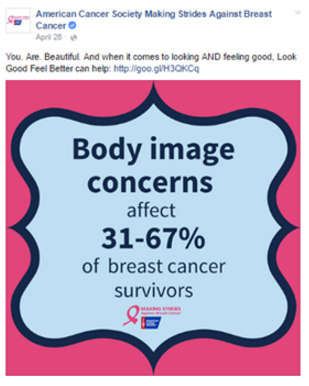 For most organizations, communicating strength and warmth isn’t about a single post, it’s about striking an overall balance on your feed.

So the next time you’re reviewing your social media posts, keep in mind the following tips for gauging the strength and warmth of your organization’s profile:

3. Not every post will (or needs to) strike a perfect balance between strength and warmth. It’s okay for some to be strong and others to be warm. The important thing is to show your followers that you can project both qualities.

What are some other ways you convey strength or warmth on social? Tell us @mrcampaigns!